There’s a handful of interesting things that I would like to share about the upcoming total solar eclipse at 12 Sagittarius 22 on Dec 4th, 2021. (I will get to the birthdays associated with this eclipse later in this article.) First, this eclipse is configured very closely with the upcoming exact Saturn / Uranus square on Dec 24th, 2021 at 11 Aqu 06 and 11 Tau 06 respectively giving us a 1 deg 16 min orb which is fairly close for comfort.  What this, does is give us a gigantic and powerful post eclipse trigger aspect and anything or anyone with a chart around these degrees should see some kind of change out of it. In other words, the exact Sat/Ura square triggers the eclipse degree again when the Sat/Ura square (90 deg) takes place and we should be taking notice. This is an example of one of the several reasons why eclipses are so important as they create sensitive areas in time and space–crisis points–that we all engage with both personally and collectively. 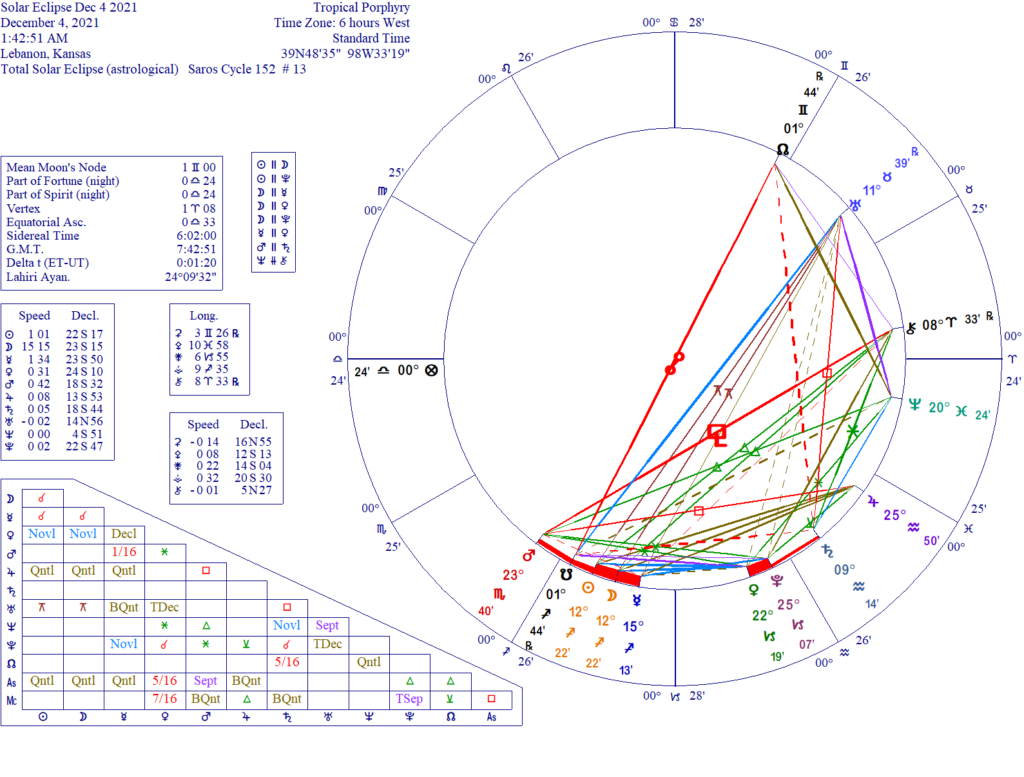 Generally, eclipses are upsetting and the energy seems to come out of nowhere at times revealing secrets and “causing” accidents and troubles of all sorts, i. e., times of crisis. Additionally, the important fixed star Rastaban, “head of the dragon” (Alwaid) is just 5 mins of arc away from the eclipse degree (precession corrected to this year, 2021). This fixed star is the brightest in the largest constellation of Draco and the authorities give it a generally negative meaning of loss and violence, although it could be said that the star is transformational in a sense. Click on the link to read about it.

(The exact moment of the astrological eclipse connects through Los Angeles, CA with about a 4 min orb to the transiting IC. Also of note, there’s a connection with the transiting Asc running through Lisbon, Portugal, heading northeast just south of the English Channel touching into Northern France. Of course, there’s many more places that I could list. And yes, the totality of this eclipse is in Antarctica, however that does not make it any less important as a place as events can and do take place there all of the time. The places that I have listed above are found by selecting Parans and limiting the pair selection to Sun/Moon for clarity in Sirius 3.0)

Using some of my Vibrational Astrology (VA) tools, I’ve been looking at several vibrational charts that popped up in the search functions of Sirius and FF; 8, 9, 19, 49, 71 and 135. I just cannot see how this eclipse is completely malefic or only destructive. The reasons for this are what’s found in the 8th, 9th vibrational (harmonic) chart and in 135v charts (really all of them have something important to say). What I’m seeing here is something along the lines of getting the poison out, seeing what must be seen and dealing what must be dealt with in order to move on. Sometimes the serpent’s venom can be used for healing. Sometimes a predatory animal would take an infected or diseased part of the body in a dream. It sounds horrible but it’s really good in the long run. This is some pretty deep level stuff and not so simple to wrap one’s head around.

At a base physical and obvious level it appears as though we will be giving and receiving less “stuff” this holiday/Christmas season. I know that this could have easily been determined without astrology but the message is more profound and striking through the symbol of the very tight hard aspect configuration of Venus, Saturn, Pluto and the Nodes in 8v of the eclipse chart (8th harmonic). People will be hurt by this, fell “less than” as a result of this and relationships will certainly be damaged by the lack experienced this year. People will feel more alone and left out and thus the crisis is felt.

However there’s some hope here as well with a half of a Star of David formed in 9v with Mercury, Chiron, Uranus, Pluto and the Nodes. There’s some psychological breakthroughs possible with this eclipse as new spontaneous communities and connections are formed as a result of dealing with hard times. “We’re all in this together,” is one way of looking at it but this is likely to be noticed in a less obvious and yet deeper way. 135v (5 x 27) shows a powerful chart bringing the Moon, Sun, Venus, Mars and Uranus together all forming a trine to Saturn. This is the relationships, romance, spontaneous breakups and new romances and alliances that will form over this time and through this eclipse’s effective period. It’s life moving as it normally does, peacefully but seeing this from a more holistic, expanded and universal way. One could say that this represents a very much needed healing that goes beyond the norm by getting back to life as usual and that in itself is a “disruption” (Saturn/Uranus) to the pandemic! Let’s hope this is the case, anyway.

I think that this particular eclipse is multi-layered, as most are, however there’s a mix here of fundamentally different base vibrations, so there’s something here for everyone. The basic question is then, what do you want this eclipse to bring or take away? And as south node eclipses often indicate, there is some kind of loss or letting go. What is to be gained by letting go? Well that’s what this eclipse is very likely attempting to ask us.

Important birthdays for this 12 Sag 22 total solar eclipse are, give or take a day on either side and also note the trigger dates above as key timing points (please read this article first before considering your birthday with regard to any eclipse energy!):

The aforementioned birthdays also interface with the Dec 24th Saturn / Uranus square (and vice versa) as mentioned above but the earlier birthday’s are a little closer in time to exactness. For example, a Sagittarius born on Dec 3rd will have Saturn sextile their Sun while Uranus forms a close quincunx to their Sun. The following birthday’s are impacted by the Saturn / Uranus square at 11 Aqu 06 and 11 Tau 06. In fact, these birthday’s may be more affected and intense for some. Here they are:

Let’s move on to the Saturn / Uranus square on Dec 24th. It’s an act of rebellious intolerance to nonsense, wherever it comes from and getting free from all of it. It’s basically radical in nature and it just cannot conform to the same old crap. Being in the fixed signs, we’re dealing with some very, very stubborn and entrenched personalities who clash in epic proportions. There’s this sense of instantly getting to the core of what’s real and what matters and this may manifest as one side vs. the other, one person getting in the way of another, one institution encroaching on another’s turf or even just a conflict within someone’s mind. But the outcome is what we’re really interested in and whatever that is, it’ll be drastic in one sense or the other. 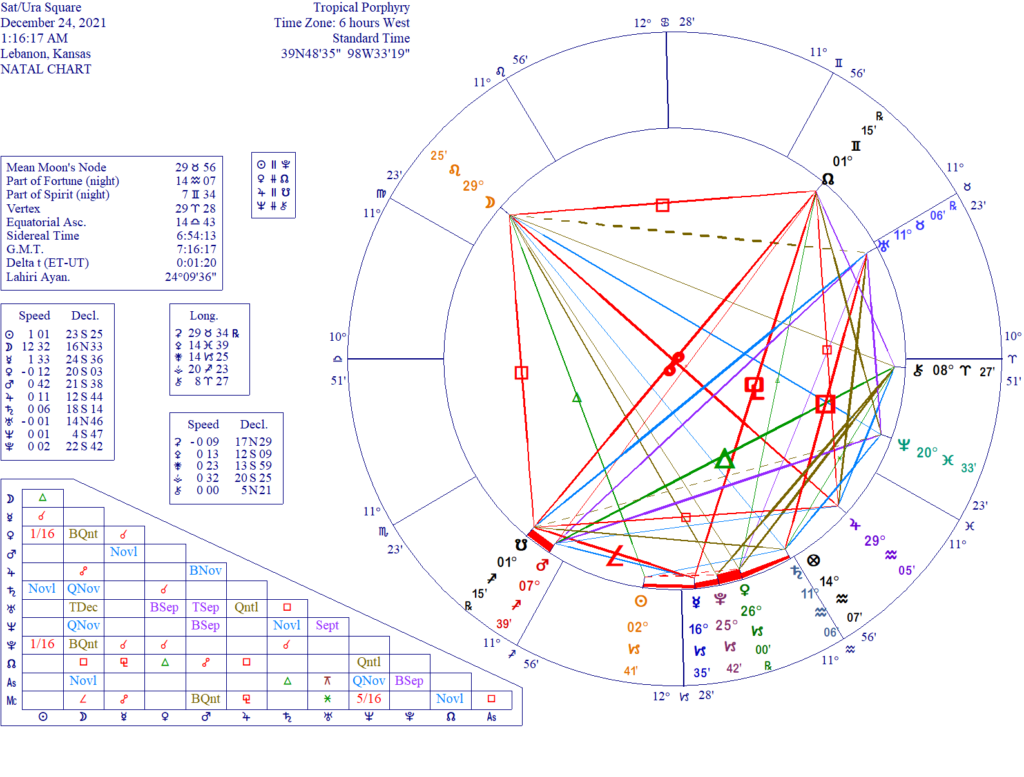 In 8v, there’s a certain midpoint configuration where a conjoined Saturn and Uranus are at the far midpoint of the Moon and Mars with a 31 min orb, which is very close for a vibrational chart. This indicates likely accidents and violence around the time of the exact square with a heavy emotional load. If nothing happens, then at least something or someone is getting their feelings hurt, however this is unlikely. I’m expecting more of a bang around this time and I think that this is inevitable. Just to be clear, I’m not making any specific predictions about anyone or anything with this assessment, it’s just more of a warning or a “watch out!” kind of communication with this. Timing of the event could be up to a day before or a day after, although it is more likely before and truly more likely on Dec 23rd as Saturn is a slow mover, even when fast and near the Sun as it is here. 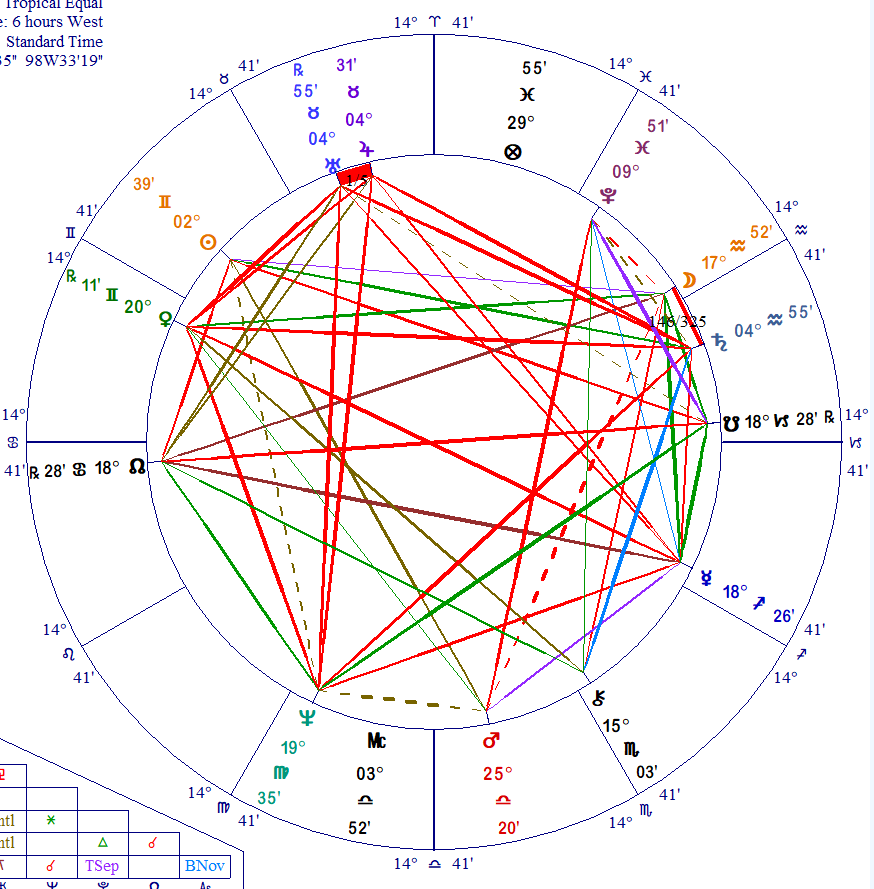 One strong vibration for the Sat/Ura square is 325v, which is a 13 x 25. 13 is special and unique, your gift and this combines with a particular kind of life that moves in an unpredictable way. Some VA astrologers might call this an out of the box playful specialness with a magical, cosmic twist that just cannot be touched or copied by anyone else. Venus, Jupiter, Saturn, Uranus and Neptune all come together to form a what I’m calling an extremely tight orb hard isotrap (isosceles trapezoid). To me this says, “Ok, you want to screw with me? How ’bout I turn you into a box of staples?” or something along those lines. Think of a bizarre, benevolent miracle that just blows your socks off. It’s difficult to put into words. (Something to do with UFO’s?–well they have been in the news lately.)

Now, I can’t say for sure precisely any more about this chart, except that the Moon, Jupiter, Node grand cross is there as well and fairly obvious in the radix chart. Something is emotionally expansive and it wants to go somewhere. It involves people and it’s happy and it needs an outlet, somewhere to go and to have a purpose. We will just have to see and keep looking up around this time–and don’t forget the trigger dates and places above.

I thank you all for your time in reading this and I do appreciate any constructive comments. Have a wonderful Christmas and holiday season!