Happy Holidays to all and Merry Christmas! It’s been a little while since my last post and I have been running 90 to nothing as the saying goes.

The upcoming Christmas annular solar eclipse at 4 degrees and 7 minutes of Capricorn happens just 13 minutes after midnight EST on December 26th, 2019. The word “annular” is derived from Latin which means “ring,” and this eclipse will display a ring of fire around the New Moon as Luna passes in front of the Sun for around 3 minutes. For most of the world this day is the day after Christmas and traditionally is the 2nd day of Christmas. It is also Boxing Day, the 1st day of Kwanzaa and the middle of Hanukkah. As a holiday eclipse for many of us, it should bear special significance in some way. 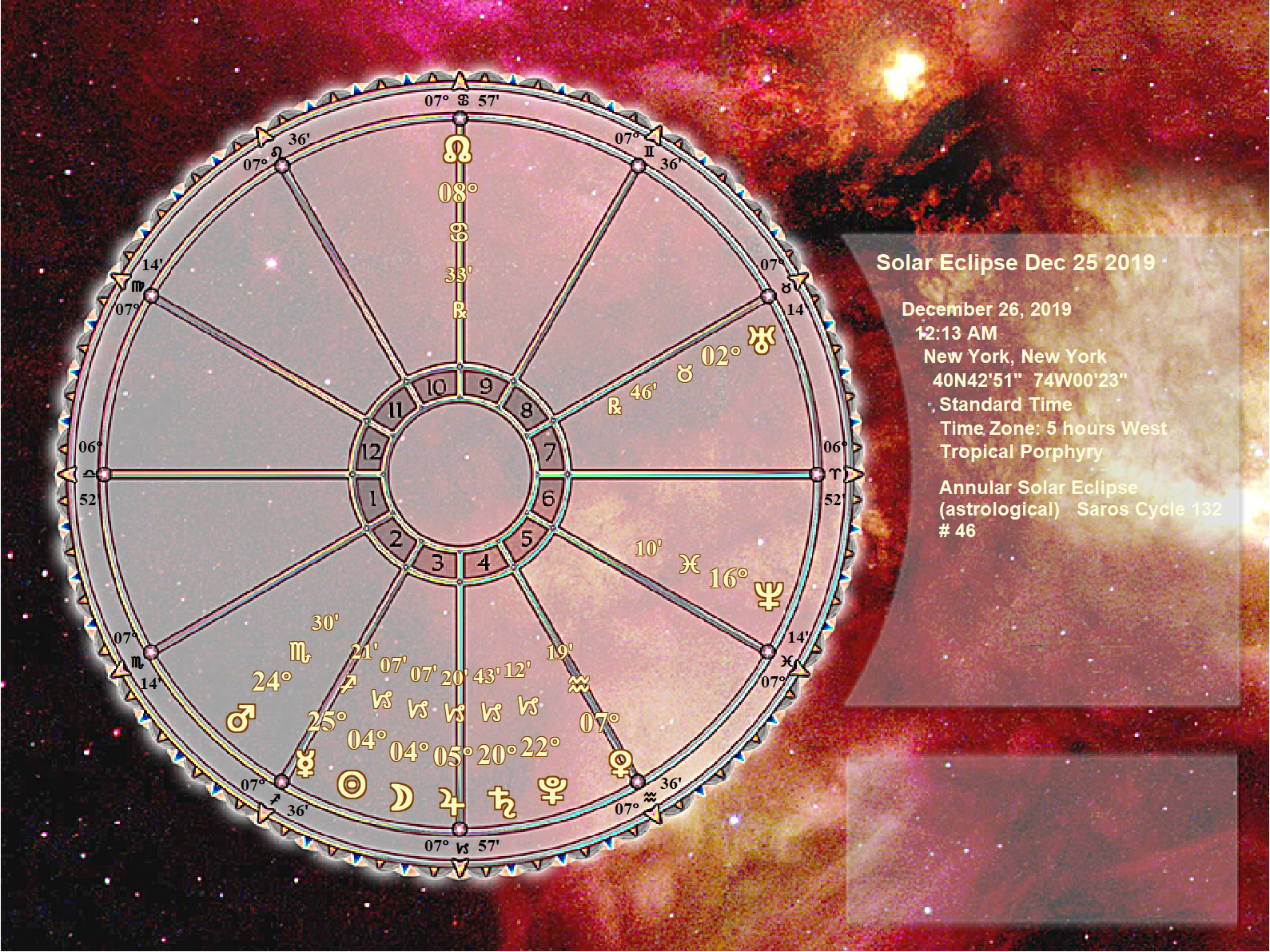 Perhaps one of the most interesting facts about this eclipse is that it occurs very near to the long awaited Saturn/Pluto conjunction at 22 Cap 47 which occurs on Sunday, January 12th, 2020 around 11 am EST (and within a year of the Great Conjunction of Jupiter and Saturn at 0 degrees Aquarius on 12/21/20). The Saturn/Pluto conjunction is only just two days following the lunar eclipse at 20 degrees Cancer (Jan 10, 2020)! The reason why this is significant is that the Cancer/Capricorn axis is extremely affected by all of this heavy duty astrological activity. In sum, we’re looking at the reflection of the home into the wider world, the many changes in big business and how that affects the daily chores as well as the work and home life balance. Capricorn sees very clearly, so all of this activity in the sign of the Sea-goat indicates a fundamental shift in how those bearing this sign and especially around these degrees of Capricorn “do business.”

It might be said that Cancer is in the business of making home a real place to feel protected, at least metaphorically anyway. Drawing the connection from it’s opposite sign of Capricorn and it’s primarily business minded focus, we see how the world is changing and how those changes will affect Cancer’s “dinner plate” so to speak. We’re looking at a restructuring of how business is conducted at a world wide level and because of this, the anxiety and opportunity is created along these opposite signs of the Crab and the Sea-goat. Fortunes are made and lost during times like these and the transfers of wealth are many. For the flexible and forward looking Cancer and Capricorn folk, these fundamental shifts will create wealth and stability for the foreseeable future. The question is, “Who is seeing the writing on the wall AND taking the right action on what they see?” Of course, these changes affect all of us in some way.

One simple way to get a sense of how this solar eclipse and the following lunar eclipse will affect you is to have a copy of your birth chart handy and examine what direct conjunctions or oppositions the eclipses are making to anything in your natal chart or your solar return chart. Next, take a look at what house in your chart the eclipse is in. The solar eclipse has an energetic equivalent of an outer planet transit in many ways and represents a crisis point in a sense. The emotional impact of a lunar eclipse is another crisis point in that way.

Traditionally, houses in the chart represent the areas of life of the person and they have their own distinct quality apart from the signs. In modern western astrology, the houses have a more direct one to one correspondence with the respective signs that they are associated with. In VA they are more psychological and fundamental in nature as they represent a lens through which the person sees the world around them. However you decide to look at the houses, the upcoming eclipses should have some kind of impact on that area of your life. You can email me with your birth info for a free birth chart sent to you in PDF formal. Please spell out the month and the day of birth and be clear about your time of birth for the most accurate chart possible.

One possible bright side for some of us is that Jupiter is so close to the December 26th, solar eclipse degree. Unfortunately, it may be more beneficial for the Scrooge’s of the world, the rich getting richer. (or that some of us will profoundly gain by losing something?) One traditional astrologer examined the chart of the eclipse, quoting older sources (and I’m paraphrasing here), that the people will be fed up with the demands of those in power and that the wealthy would want more from the “common” people and are more greedy in general around this time. In what other context would “oppression” mean with this? Here’s my interpretation: essentially, those in power have “lost their ass” in some way and as another saying goes, “shit rolls downhill.” With this, we can draw a straight connection to Boxing Day, the day when the workers and servants of the wealthy traditionally receive gifts or a “box” from their more well off employers. Perhaps the wealthy are less generous this year as they have lost heavily in the markets and their investments.

Remember, the financial situation and world markets in general are shifting dramatically. The fact that the eclipse is happening on Boxing Day is perhaps more symbolically relevant now than it has ever been. This, along with the “ring of fire” visibility of the Dec 26th eclipse at it’s most clear in countries that have have been majorly impacted by British influence in the Arabian peninsula and India and in surrounding areas (including the Philippines where many servants are sourced from), along with the many wealthy in this part of the world with their workers is very interesting. Perhaps a new kind of justice for the servants and working class is on the horizon, or at least a new found attention will be drawn to this issue.

If your natal Sun falls in the degree of the either one of the eclipses, of any sign, then there should be an impact or something significant in your life associated with the meaning of the Sun in your chart, your obvious way of being and essential self in the present moment. The most important birthdays for the upcoming solar eclipse at 4 degrees Capricorn are:

Here are the birthdays most impacted by the upcoming lunar eclipse at 20 degrees Cancer:

In sum, I think that eclipses and other heavy duty astrological factors from outer planets do have a kind of fated feel and affect our lives. If you are an astrologer or have experience with astrology, then you probably at least partially agree. It is the awareness and our responses to these events that often times makes the difference. Quantum theory relates to this in the sense that once the particle is viewed, then it changes. I believe that we have a degree of control and negotiation ability with these powerful forces and you can watch and steer these energies in a certain way. This is not about fear but rather about information and knowledge, specifically fore knowledge. At the least, you can say a prayer for yourselves and loved ones going through their own crisis periods, whether or not they are related to these eclipse events. Many Blessings,

(Also, see an article of mine that was recently published in the International ISAR Astrologer, Dec. 2019, Vol. 48 #3, “Accident Proneness Research in Vibrational Astrology.”)