Hello and Greetings to clients, astrologers, astrology fans and subscribers,

Here’s a quick timeline for the current Mercury retrograde period that we are in for July 2019.

If you can think back to what happened around June 20th, then you may have a clue as to what is transpiring in the background for you personally, especially if you have noticed that there is anything significant about this time. And, as we are in the middle of two eclipses as of this writing, this is probably true and you may be feeling the extra special effect of a long cycle Mercury retrograde period only covering a little more than 10 degrees (just over 24 days long!). According to the late, great Robert Blaschke, these are the worst periods for Mercury retrograde as the average daily speed is slow and is concentrated over a shorter area. Mercury can cover around 16 degrees in it’s short retrograde periods. [As an aside and in case you’re curious, it is my understanding that long-time astrologer Joanne Wickenburg coined the term retrograde shadow or shadow period, to describe the area in the zodiac in which the retrograde planet moves backwards.] 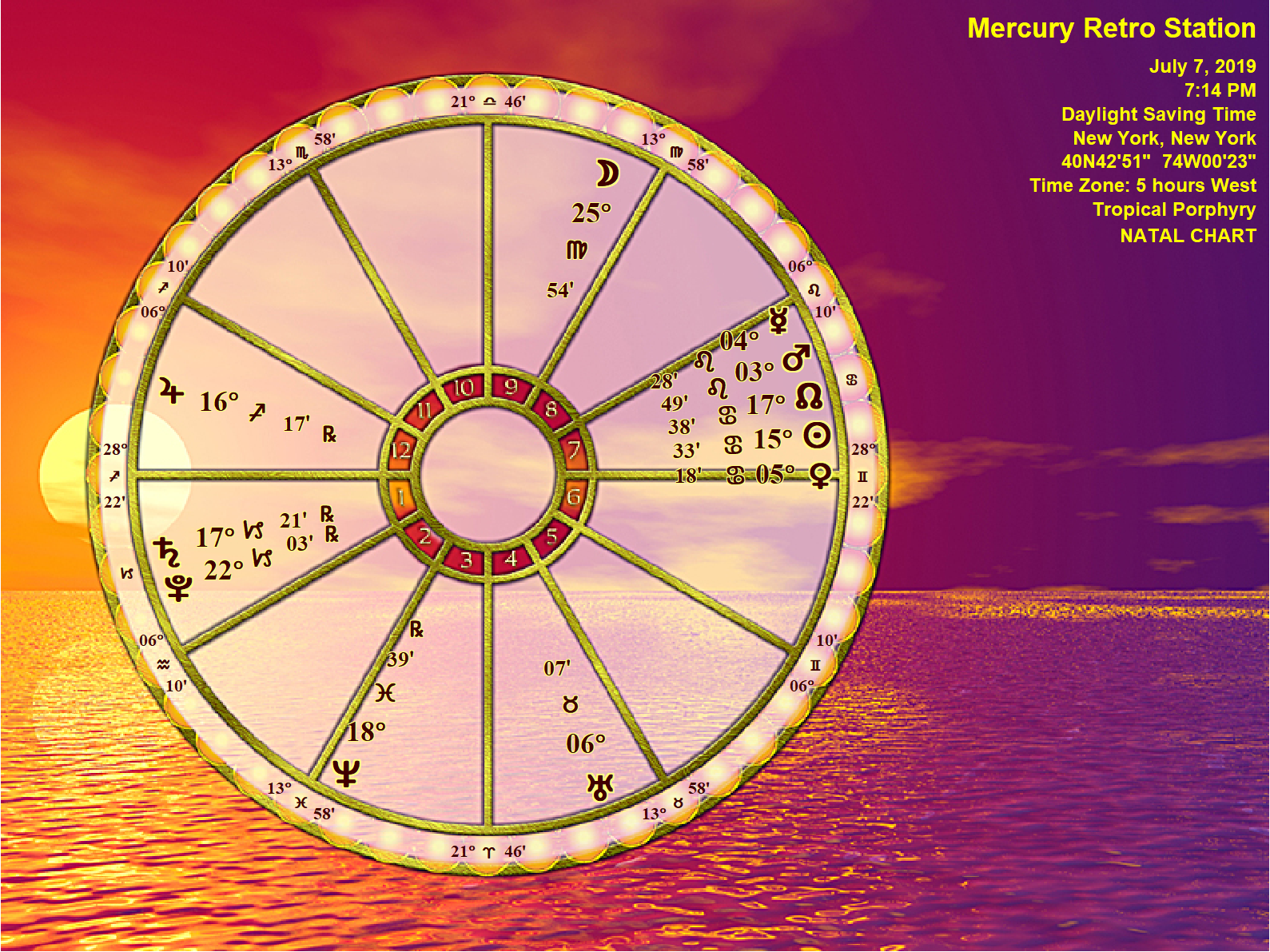 If you can possibly hold out through August 29th on any kind of important decision, when Mercury steps into it’s own sign of Virgo, especially with regard to those decisions that are of a discretionary nature, then it might be a good idea as Mercury has moved out of Leo, the sign that it started the retrograde in. I first learned of this idea from Houston area astrologer Robert E. Brown in August of 2005 from one his Writings In The Sky columns in the Indigo Sun magazine; I remember something about “getting out of the Mercury retrograde woods.” This is a sound idea as Mercury has changed signs, starting anew in the next sign, direct in motion. Here, the communication is clear, direct and on it’s way, just like Mercury.

However, I’m not one of those Mercury retrograde “doom and gloomers.” It’s more subtle and more nuanced that that. And of course, I do understand that sometimes life cannot wait and decisions have to be made but that’s not what I’m writing about here. Look at things like non-essential major purchasing decisions or new relationship decisions. Are you planning a permanent move half way across the world with someone that you met two weeks ago? How about signing up for some subscription service that you never knew that you needed (and did you read the fine print)? Or what about making a promise to someone that you know you will later regret, hoping that they will not take advantage of what you’re promising?

This is a good time to address anything that requires fixing and that you have been putting off for a while. As they say, anything involving “re” like repairs. It’s good to take an inventory around this time and start thinking about what needs to be addressed. For example, if you have been planning on calling someone and have not, then you should probably call. Vacations and road trips are good if you are long overdue for one. Home repairs, cleaning out the closet and any communication that has been bugging you for a while, might be a good idea at this time. You may be thinking, “but Mars is conjunct Mercury for the retrograde chart and that’s bad for communications…” That’s not necessarily true, however it could be if that is your intent. The fact is, is that Mars just wants to accomplish something, to do something constructive (VA). Mercury just wants to get the point across, to communicate and the retrograde takes us back to an earlier time. So, perhaps this will be the time to say what must be said, what is long overdue, however harsh or uncomfortable the circumstances.

In sum, we’re simply being asked to go with the flow with this Mercury retrograde in particular, to have an open mind and be flexible with any changes that want to happen, to let things happen instead of accepting or rejecting. Yes, when we accept or reject ideas, situations, people or anything for that matter, then we’re “hooking” ourselves onto those things, “expecting” an outcome or attempting to control an outcome. Even hoping for the best is a form of this. Allowing is much different and is related to trust. I think that’s one of the key lessons here with Mercury retrograde, it is to simply trust in the source or the universe or whatever your belief is, that things do happen for a reason and that there is a purpose on your particular journey and a surprise along the way; Mercury retrograde is one of the essential astrological energies for the quest. Allow yourself to make the most of it!