A lady was asking me the other day when I started to learn astrology but before I could answer that I had to think back to a time when I was very young. Was it when I was 4, 10 or 14? Astrology really seems to have been with me my entire life. But if you had to pin me down to a hard time, then I would have to say that it started in the summer of 1995 with Linda Goodman’s Sun Signs followed shortly by Star Signs, Relationship Signs and Love Signs, among other greats to include the works of Dane Rudhyar, Stephen Arroyo, Grant Lewi, Robert Hand, Demetra George and Liz Greene among several others (although I had read Suzanne White’s The New Astrology in 1992). But I was just a teenager in those times and so it goes without saying that I did not understand astrology back then the same way that I do now. Of course that would be an understatement for the vast majority of us that study the art. 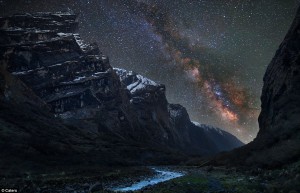 The Milky Way over Nepal by Anton Jankovy

Was the astrological knowledge that I was taking in at that time confirmation of being a competent astrologer? No, however I think that it was a very basic, solid foundation for understanding beginning astrology, the ABC’s if you will, as well as how to think in astrological terms for future reading, understanding and application. I now believe that the determination to learn on my own was the key. As astrologer Jeff Jawer would say, I was starting to learn to play the “instrument” of astrology at a very basic level (Jeff defines an astrologer as anyone that plays the instrument of astrology). Linda Goodman made her unique kind of modern western sun sign astrology sound fun to do and to learn for just about any reader, so that we can get to know better those around us as well as ourselves. In her books we find serious and yet funny stories of how the Sun comes through the various tropical signs. She essentially helped to lite my fire for astrology that continues to this day and I thank her for that.

Over the years I have seen many ways of how others learn astrology. You can even go to college now (Kepler, Avalon) to get a solid astrology education. There’s correspondence, online, certification, one-on-one and of course the vast majority of us are self-taught. My belief is that there are advantages to all of these and to pick one that is right for the individual is of the utmost importance. But what kind of astrology do you learn first and why? Really, there is no right answer as there are as many different astrology schools and schools of thought as there are forms of martial arts, not to confuse schools of thought with areas of astrological inquiry, i.e., horary, electional, natal, mundane, financial, etc. which are different. So what we are left with, ultimately, is what kind of astrology resonates with us the most, what feels right to us. For example, a more traditional form of Western astrology, i.e., Hellenistic, Medievel or Renaissance, may be the right way to go for someone who is more rules oriented. Then there are others who may prefer a more open interpretive or free will approach like like Evolutionary or a modern psychological approach (Dane Rudhyar). To me, the different astrologies answer different questions about people, places and things. They are simply the various lenses observing the same sky.

Additional options would be Vedic, Chinese or Tibetan astrology (I am currently working Chinese Four Pillar analysis in combination with Western astrology). The eastern approaches take into account certain spiritual variables that other schools may leave out or not consider at all. Your own personal philosophy on life can inform what kind of astrology resonates with you the most; what kind of astrology that you can be most effective with. This brings up something that really must be dealt with when working with yourself and others; are you fated by the stars or is there some kind of choice or free will involved? Do the stars simply compel or do they force our hands? These questions are critical in each and every astrology problem that you will have. One astrologer commented that the reason why we are presented with certain predictive astrological information is to prepare us for our unalterable fate, that this was a sign of grace to prepare our soul for the inevitable. Others may say that this is the opposite or as a warning to change our ways now so that current events do not lead to disaster. My contention is that both realities are at play and it is up to the astrologer to flesh out the differences and to determine which force is more viable to the particular situation or question. We’ve seen those that do everything in their power to ruin their good luck as well as those that just can’t catch a break no matter how “good” they are. Astrology, as a problem solving tool, can show us the way in which we can shed light on those issues and predicaments in the lives of others.

We are, in the end, taught by astrology itself while doing astrology. We can read all day and night, talk to other professionals, and think about astrology even more but in doing astrology we see by direct observation how astrology works (not to downplay thinking about astrology). So, we are really self-taught at every turn, moving into higher and higher levels of understanding, while at the same time synthesizing previous knowledge to arrive at wisdom, which can only be gained with time and age. There is something very Saturnian about astrology. One may be able to imagine an old and wise Rabbi, listening attentively to the many questions that a young astrologer has. The point is, is that there really aren’t that many answers to the questions that the young astrologer has, only many, many observations and examples. The answers are on a case by case basis, leaving infinite possibilities as the answers to astrological inquiries. Astrology has to make itself available to us but before that, our minds (Mercury), must be made available to it, only then are we able perceive, in our own unique way, how the universe speaks to us through the sky overhead. Thadd:::SignsInLife.com