First, many, many thanks to everyone for continuing to check out the site and read what I produce, however little that is as of late. The article that you are reading is a long time coming, because I discovered this interesting chart about 6 months ago, however the inspiration for the chart is even more strange and wonderful. If you have been following along with the Answers From the Universe Show: The Andronicus Transmissions with hosts Jessica and Jay Pee on Wolf Spirit Radio, then you know what I am writing about. It is such a great show and fun to listen to, however the material and background for the content of the show is something that I will let you discover on your own. What I like about AFTU is that you can just pick a random show and get many insights, answers and clues that you are looking for in a synchronous kind of way, and that is what makes the show so exciting and I truly look forward to it every week. 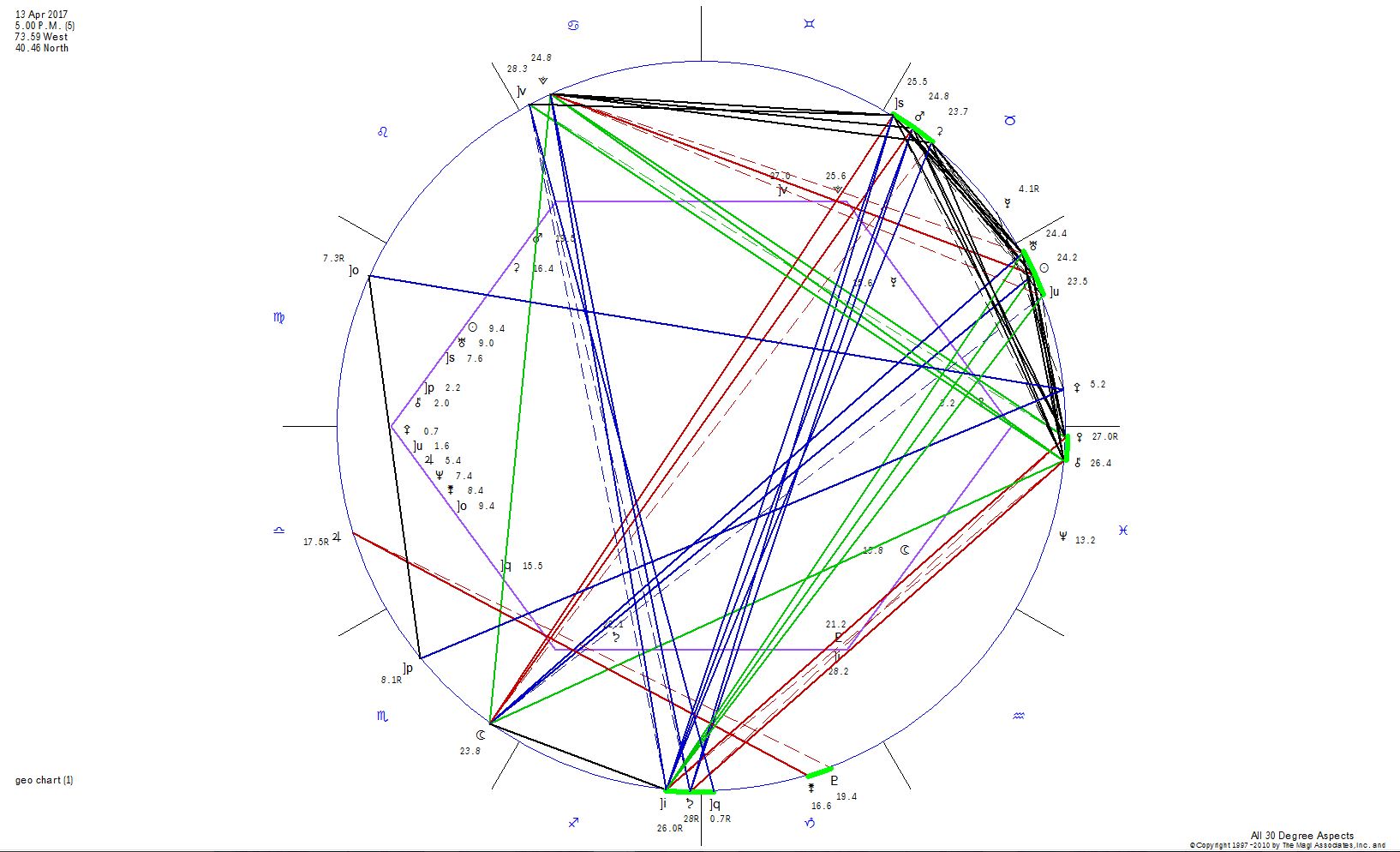 Here’s a little context and background for this short article before we get into the chart of April 13th, 2017.

While listening to the archive of the AFTU show that aired on September 29th, 2016, a particular transmission came through titled Helios 1. Many fans later commented to Jessica that this transmission stuck a chord with them and I was no exception to that. The reason that I was very intrigued was that when Jessica asked, “When will this process be complete?” Helios answered, “When the sun rises and sets seven times at the upper most point of Aries. This was my most challenging aspect, the warrior.”

Instead of rewriting what I had previously added to the WSR forum on Helios, I thought that I would include it here:

Almost instantaneously Edgar Cayce came to mind and then I remembered reading that the idea of precession came up during the readings or through the studies of Cayce’s readings including a comment in one of the readings where one of the signs was off (a clue). Cayce was not an astrologer, however astrology could not be ignored as astrological information was frequently pulled through and given to the client (In a very simple way to look at it, precession is the difference between the tropical and sidereal zodiacs with the sidereal being more closely aligned to the constellations and the tropical aligned with the Earth’s seasons–there are various reckonings of the sidereal zodiacs with the traditional 12 animals).

Naturally, I had to investigate the chart for that time which is April 14 2017, which marks roughly the beginning of sidereal Aries, which aligns closely with the constellation Aries. The upper most part is the beginning of the sign. Translating here we get the first seven days of sidereal Aries using the sidereal zodiac (Fagan-Allan which is close to the Babylonian). As Helios is a stellar being, he would naturally reckon the zodiac according to a spatial stellar arrangement which the sidereal zodiac clearly shows, and I know that I’m making a guess here but it fits. As this is around the time of Easter, the timing further fit in with one of Jessica’s hunches.

When I pulled the chart I was shocked at all of the geometry involved which I described above. Pulling a subsequent chart with newly discovered planets/planetoids added it gets even more interesting and the geometry is even more reinforced: ixion, orcus, peleus, quaoar, sedna, eris (ub313) and varuna. Basically, all of the aforementioned bodies are connected in some way with the traditionally recognized planetary groups. However, these bodies are much more farther out and very slow which strengthens their significance in the charts alignments.

In case you have missed it, what is so important about this chart is that it is set for a time when the Sun is making its ingress into sidereal Aries, which is a direct reference to the upper most point. Also, the item that I had missed from the time that I had originally posted to the forum back in October 2016, is that the Moon is making several important connections to the primary body of this incredible configuration in just fractions of a degree prior to the exact midpoint and alignment of the Sun, Uranus and Eris around the beginning of constellational (sidereal) Aries, so that’s the chart that I’ll show here. What’s so amazing about this chart? All of the major astrological bodies (most of which are in popular use today by astrologers) are making aspects in 30 degree multiples (12th harmonic)–except Neptune, however Neptune is in quintile (5th harmonic) to the very tight Mars/Ceres/Sedna alignment. Of course, the 12th harmonic includes all of the five major Ptolemaic aspects: conjunction (0 degrees), sextile (60 degrees), square (90 degrees), trine (120 degrees) and opposition (180 degrees). The remaining two are the semi-sextile (30 degrees) and quincunx (150 degrees) giving us seven possible aspects for the 12th harmonic group. (There are only two possible aspects in the 5th harmonic: quintile and bi-quintile, 72 and 144 degrees respectively).

Yes, I know that I’m interpreting the Helios’ answer here, but is it a coincidence that Jessica commented that she thought that this time was around Easter, Sunday April 16th, 2017?

I’m sure that there is much more to this chart and I just haven’t spent all of the time that it takes to see all of the possibilities but I know that it is worth discussing and getting out there.

You can listen to the entire Helios Transmission on Youtube here. This Youtube link will take you to an interview with myself, Jessica and Olivia.

Many thanks for reading and please leave your comments and questions below in the Disqus forum.