Five element theory is one of the most fascinating aspects of Chinese and Asian astrology and is arguably the most essential concept to understanding astrology in the East, aside from the underlying philosophical principle of Yin and Yang or the active and passive principles of Life. The five elements, along with the 12 branches or Chinese animal signs, form one of the best known divination methods, The Four Pillars of Destiny, or Ba Zi, Chinese for “Eight Characters.” The five elements provide a philosophical framework as well and are included in other systems such as Chinese medicine, acupuncture, martial arts, feng shui, etc. They are sometimes known and can be thought of as “spirits” and take on a larger personality and role within Four Pillar analysis. For example, the Day Master is the stem of the day pillar in Four Pillar analysis and is the “self” of the person in question. That element, whether yin or yang, describes the essential nature of the person. In Eastern astrology in general, the five elements are not limited to just Four Pillar analysis but are included in several other systems, such as the astrology of Tibet and Japan, which varies considerably in many areas from Chinese methods. However, the five elements maintain their basic characteristics and qualities throughout these divergent systems in Asia. 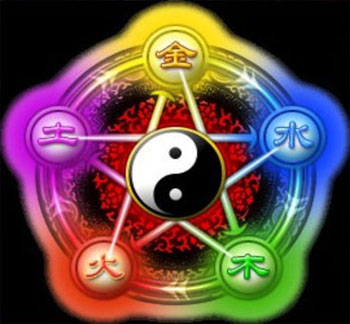 One of the first questions that is asked is by the western astrologer is “How can there by five elements, when there are only four?” It is almost nearly inconceivable to some who are so steeped in the rationale of four elements within a Western astrological framework, that to even suggest an additional element would be apostasy, and this is understandable. But this is thankfully not the case with some open minded persons and the reason for this, is that the five elements operate outside the aforementioned four element framework, which can be seen very early on in the five element learning process. In fact the five elements are a cosmic framework, representing five operative forces within our universe each containing its opposite as a whole, yin and yang. The five elements are described as Wood, Fire, Earth, Metal and Water.

This idea of cosmic significance bears repeating as they are not necessarily elements at all but symbolize a larger reality—they are the “crossroads” between the transformation of energy from one form to the next between yin (feminine) and (masculine) yang, heaven and earth. The elements interact in a dynamic way. Here is a short summary of the constructive or productive cycle: Wood benefits Fire and Fire is the son of Wood. Fire is the natural outlet for Wood and so the Wood ideas fan the inspirational flame for those governed by Fire. Earth follows Fire and the ashes from the previous process are what forms Earth. Earth is practical, stable and centered, representing the “center,” and the middle point between the seasons. Metal comes from Earth and represents the implements of war as well as law but also the arts. Water following Metal gives us the process of creativity giving way to and inspiring commerce and productivity with Water representing the exchange of vital resources and currency. Water, in turn, nourishes Wood, giving Wood the resources that it needs to formulate its ideas, Wood being the intellectual element.

In the destructive or controlling cycle, a star can be drawn from Wood to Earth and then followed around until complete. We will start with Wood again as it “destroys” Earth, zapping it of all its natural life giving properties over time, Earth benefits Wood ultimately, though. Next, Earth absorbs Water and contains it, stopping its natural outgrowth, containing it differently than its parent element of Metal. Again, as in the above example with Wood and Earth, Earth is benefited by Water, moistening it and adding life to it. Following that, Water destroys Fire but Fire warms Water making it useful for living things. Fire controls Metal, melting its shape rendering it ineffective, with Metal providing the fuel for ever more spectacular flames, i.e., molten lava. And finally Metal chops Wood, destroying it but giving it shape. Wood gives Metal a purpose and something to do. But all of these above descriptions are not necessarily “negative” as some elements are in need of control and need to be restricted. When we start to discuss the how the polarities of yin and yang interact with the five elements, giving us 10 elements, then we will begin to see a more complicated and equally fascinating interplay between the elements come out.

Here are a few questions to contemplate: Will a little bit of soil (yin earth) destroy an entire lake (yang water)? What is needed to curtail excessive forest growth (yang wood)? Can Earth put out Fire? And, can a single bucket of water (yin water) be used to put out a house fire (yang fire)? All things being equal, yang is stronger and overwhelms yin. Let’s elaborate just a bit. While Earth destroys Water, yin Earth cannot completely curtail yang Water, just as yin Water cannot completely control yang Fire. However, if you reverse the productive cycle, we can produce a similar effect to the destructive cycle with Earth smothering Fire, Fire burning all the Wood, Wood absorbing all the Water, Water corroding all the Metal and Metal outweighing the Earth exposing it, thus allowing erosion to take place. With the five elements a delicate balance must be struck and the system seeks this balance out naturally on its own. Another way to put it, is that the five elements represent a single whole cosmic ordering principle in which both five and ten separate and yet equal forces are constantly interacting within the yin and yang, active and passive principles. Let’s go deeper into the meanings of each element and learn about their associations before we go any further.

WOOD—Green, East and Spring. Jupiter and The Signs of the Tiger and Rabbit. The organs are the liver, eyes and ears. Wood is Anger, Creativity, Kindness and is Scholarly, Conservative and Generous. Wood represents Relationships, Children and Medicine. Sight. Intention of Creativity
Yang Wood is trees, forests and wood furniture
Yin Wood is branches, vines, plants, grass, fungus, herbs fabrics and paper—essentially anything without a trunk

FIRE is Red, South and Summer. Mars and The Sun The Signs of the Snake and the Horse. Fire is bitter, organs are the heart and tongue, circulation and blood pressure. Touch Happiness, Hysteria, Intellect, Education, Fame and Reputation. Courteous and Honest. Intention of Expression
Yang Fire is all natural Fire, forest fires the Sun, etc.
Yin Fire is all man-made Fires, candles, campfires, etc.

The Chinese Animal Signs below 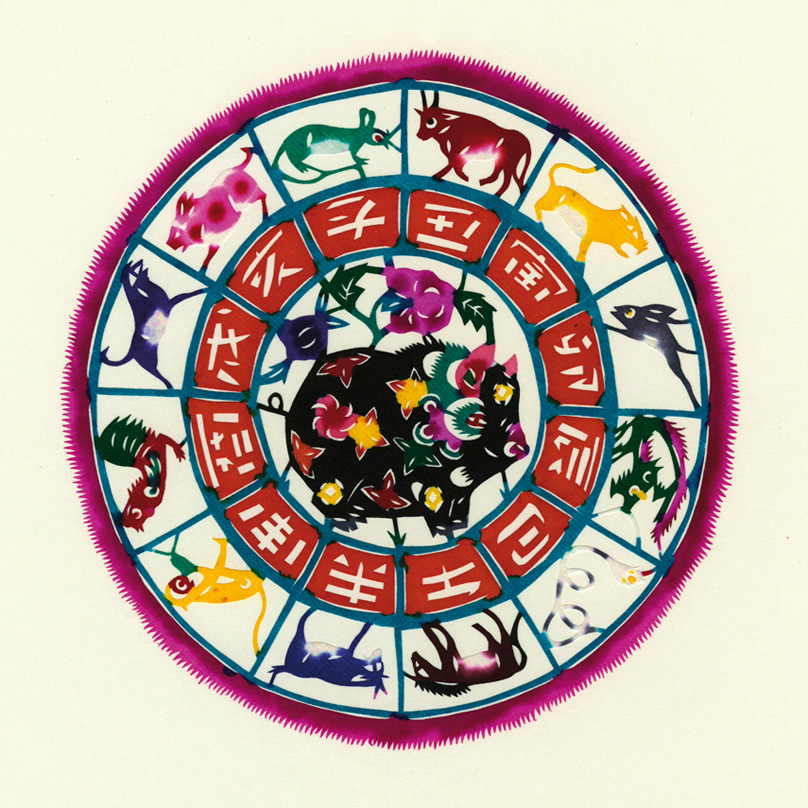 To get an idea of what a Four Pillar or Ba Zi chart looks like, here’s an example of a made up chart for John, born 5/21/1958 at 5pm, local time. With this example, I wanted to illustrate what imbalance looks like, however there is also strength here as well. What I did not include below in the slide is that this person may be very creative with his hands–he may possibly be a craftsman, welder, engineer or mechanic. Of course I’m just looking at this from a Four Pillar perspective but I’m getting a little ahead for those not completely familiar with the Chinese Animal Sign basics. Even so, one can intuit just from the information presented here the elemental interactions, which give a picture of John’s nature within the context of five element interaction. 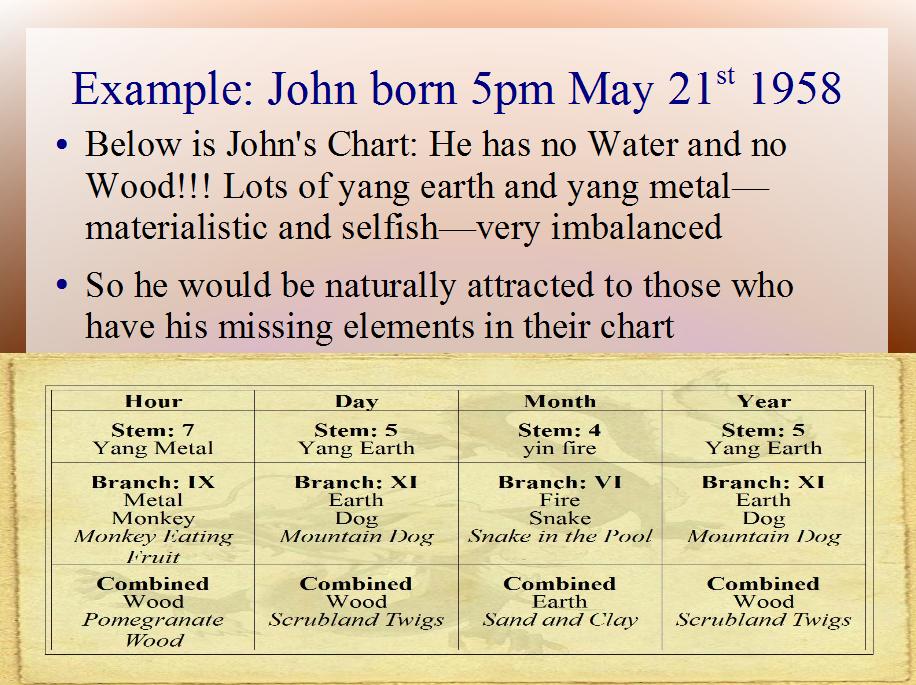 To prevent getting too deep into the Chinese Animal Signs in this article, which is a whole subject in and of itself, or Four Pillar Analysis, we will have to come to a close with this article fairly soon as the Five Elements and Animal Signs have to be completely understood before we can get to the beginnings of Four Pillar Analysis. With that, there are at least two more articles left to go in the discussion leading up to the Four Pillars, which are soon on their way. I would like to leave with a beautiful and relevant quote from Bill Watson:

“Chinese astrological systems, like those of the West are based on the understanding of the created universe as an organic whole, unfolding in space and time. Because there is no absolute separation between events and objects in the space-time continuum, human consciousness and experience is entwined in co-evolutionary development with the natural world and all other parts of the cosmos. The changing relationships between its component parts create cyclic patterns, which can be observed and measured. The monad (T’ai Chi T’u) represents the metaphysical principle of unity-in-duality in a world of opposites. This primary symbol of wholeness is composed of Yin and Yang, described by Chuang Tzu as “The Two Powers of Nature.” They represent the polar aspects of all interrelated phenomena. The alternation of these two forces produces the processes of nature and the entire universe, visible and invisible. The great sages called the Yang force the movement of the Heavens and the Yin force those energies generated within and by the Earth. From observation and intuition, they came to believe that these forces exerted an influence on the earth and all terrestrial life. The Heavenly forces were given the symbolic names Wood, Fire, Earth, Metal and Water.” -Bill Watson  Chinese Five-Element (Tzu P’ing) Astrology,  August 1996

Thank you for reading. Please leave you questions and comments below. Thadd:::SignsInLife.com