Mike wrote in recently with a few concerns. First, he wanted to know if he would forever travel aimlessly. Next, his concerns were about running out of money. He said that he had been living in the U.S. for about the last ten years by way of the Philippines. To be honest, when first reading Mike’s email things sounded a bit bleak. I got the impression of the beginnings of feeling hopeless. He also commented that he has a weak Yang Water daymaster or self element. I think that Mike is most likely a strong Yang Water self. Here are Mike’s charts below as well as my response:

Here’s the thing: there are several traditions in the interpretation of the Four Pillars. First, your chart will require testing to prove whether or not your chart is strong or weak as you are neither dominant or feeble–I can rule the last two out. You have two half water alliances with the two monkeys and the dragon in the month pillar. In addition there are two metals in the month and year stems. Metal generates water, thereby supporting the self. There are no rivalries in the stems to compete with the self. Because the Dragon is busy combining away with the Monkeys–we can take away that earth. Now, we are left to deal with the Earth in the hour stem–this is the least influential placement.

Now look at the dog who is dry hot earth that does contain some metal as well as fire. You have wealth, killings and resources in that pillar which is the third most influential. I would bet that you are a strong Yang Water person (self element) but again we would have to verify that through testing the luck cycle and seasonal/yearly cycles. Water self elements seem to love to travel whatever the case may be. Looking at your western chart–yes I would say that you certainly have the urge to travel and are compelled to do so. With the Moon in Gemini on the Midheaven (MC) aspecting the nodes. The natal Moon is also parallel natal Uranus which heightens this impulse tremendously. With Neptune on the IC, you probably consider the sea to be home. [we cannot forget that Mike’s Moon is opposite Neptune, creating further feelings of instability]

Natal Saturn is on the Asc–what about working on the docks somewhere? [this idea is from James Holden’s translation of the Mathesis] Or with shipping? You seem to have the chart for it. You pillars are all yang. Do you have a masculine appearance? Transiting Saturn is parallel your natal Mars–this is a feeling of being frustrated and stuck in traffic of being trapped and going nowhere. Transiting Neptune is contraparallel your Sun–this is giving you a sense of bewilderment, of being lost and confused. But it could also bring a sense of enlightenment.

You must slow down and consider where you are and attempt to think as rationally as possible getting many opinions [about your situation]. In your Luck cycle, you are in the Sheep branch of the water sheep luck pillar that started in 2008. I’m thinking that the Sheep is fighting with the dog and dragon, possibly breaking up the half water alliances but this will need to be verified. What was 2008, 09, 10, 11 and 12 like for you in the yin water part of this luck cycle? If you feel like you can handle the additional discipline and structure and that it is fair, then you might be strong, however if the opposite is true, then you will need to support of additional water and metal. the metal will weaken the earth. Feng Shui remedies, Vedic remedial measures, meditation, soul recovery, prayer, church and support groups are just some of the methods that I can suggest. Let me know if you have any more questions or comments. Thank you again for reaching out.”

Mike wrote back with a positive response as he felt that all of the comments were “spot on.” He said that he had been having this thing for seeing packages move in and out of shipping containers! And that he can visualize and trace in his mind ETA’s and ETD’s for packages. He also wrote that he is going back to school for math and CAD and that he has a “masculine look,” likening himself to a fighter from a Kung Fu movie. What I did not tell Mike is that his two commanding pillars only further strengthen this appearance of his–the Water Dog and the Metal Dragon.

We did not get into Mike’s positive and negative times in his life. The reading has stopped here for now. What I am fascinated with, though, is how two totally different systems work with the synergy that they do–the Four Pillars and the Western Chart. As an aside, I will have to start introducing some of the Uranian methods that I have been working with as well. They are powerful in and of themselves. And, I would like to challenge everyone who is doing astrology to start working with midpoints as you will be nothing less than totally impressed with the results. I will have to find more time to include them in future articles. As for the Four Pillars, well, I am totally hooked on this technique as too. It’s really more of a puzzle than anything else, some charts are more challenging than others.

Thanks everyone for reading and have a great Christmas, Holiday Season and especially New Year. The year of the Wood Horse starts Jan 31st, 2014 with an interesting last New Moon just before that on the 1st. This is also the day of an exact and extremely tight Heliocentric T-square of the Earth, Uranus and Pluto–Yikes! But the good news is that will be the last one for a while–and yes, I’m a little concerned about that date as Mars and Saturn create a midpoint axis with Uranus on the other end with two close biquintiles–lots of pressure on Uranus. We must pray for the best and highest to come out of this tense configuration. Thadd:::SignsInLife 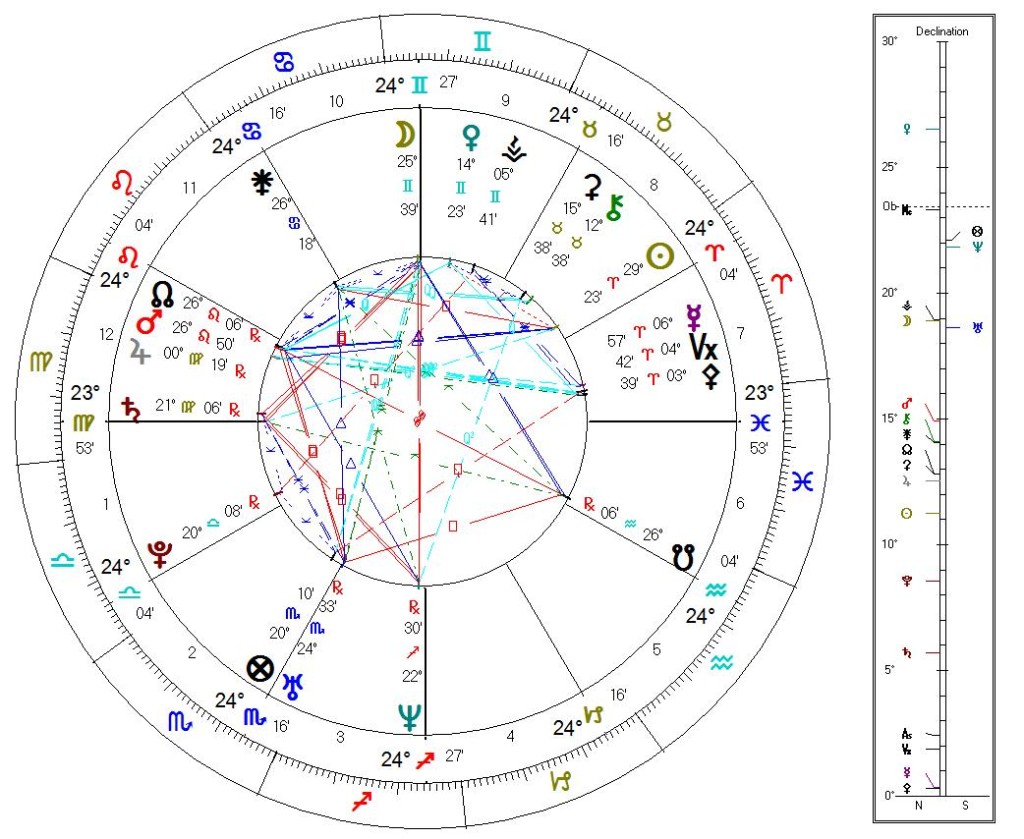