“M” from one of the recent previous Chinese Four Pillars Q & A posts wrote back in with her natal details. Moni was born May, 28, 1991 at 1:19pm in Ljubljana, Slovenia. She does not have a specific question other than what she originally wrote requesting information regarding the relationship between the stems and pillars. She wrote that her self pillar is the Earth Dog, which it is. I’m really glad that Moni wrote back because we have an incredible chart here that illustrates some principles that we have only touched on in the previous Chinese Four Pillar Analysis articles. Moni’s chart is heavily dominated by Earth and Fire, here it is below:

Moni was born in the month of the Snake when the Fire element is ruling. In addition to the Fire that we can visibly discern from the from the Horse which pure cardinal yin fire, and the Yang Fire in the Snake, there is actually Fire AND Earth in all of the animal symbols present. If that wasn’t enough, we have a half fire alliance through the Horse and Dog as well as a complete Southern Directional Alliance with the Snake, Horse and Sheep (remember that these are the Southern signs) creating a complete Fire team. On top of all of that, we have a stem transformation to fire with the Yang Earth from the Day pillar and the yin water in the month pillar, turning both stems into Fire. This transformation takes place because we are again, in the month of Fire, the beginning of summer with the Snake. There is so much Fire here to support the Earth self (or transformed Fire self) that it would be hard to imagine this chart being anything else other than Dominant–even with making the argument that the Horse is fighting to combine either with the Dog or the remainder of the Fire directional team–the Snake and Sheep. It could be one or the other or both possibilities depending on the luck and seasonal cycles. Jerry King outlines this concept in his first Four Pillars of Destiny book. But what if the self remained Earth? This doesn’t matter either because Fire feeds Earth. This is a person with incredible resources at her disposal. As long as she remains in her Fire and Earth cycles she should remain Dominant. This chart reminds me of Jerry King’s description of Donald Trump’s Fire and Earth dominated Four Pillars chart.

But let’s take a look at something else–her Western chart. After seeing her Four Pillars chart I had to take a look. Here it is below: 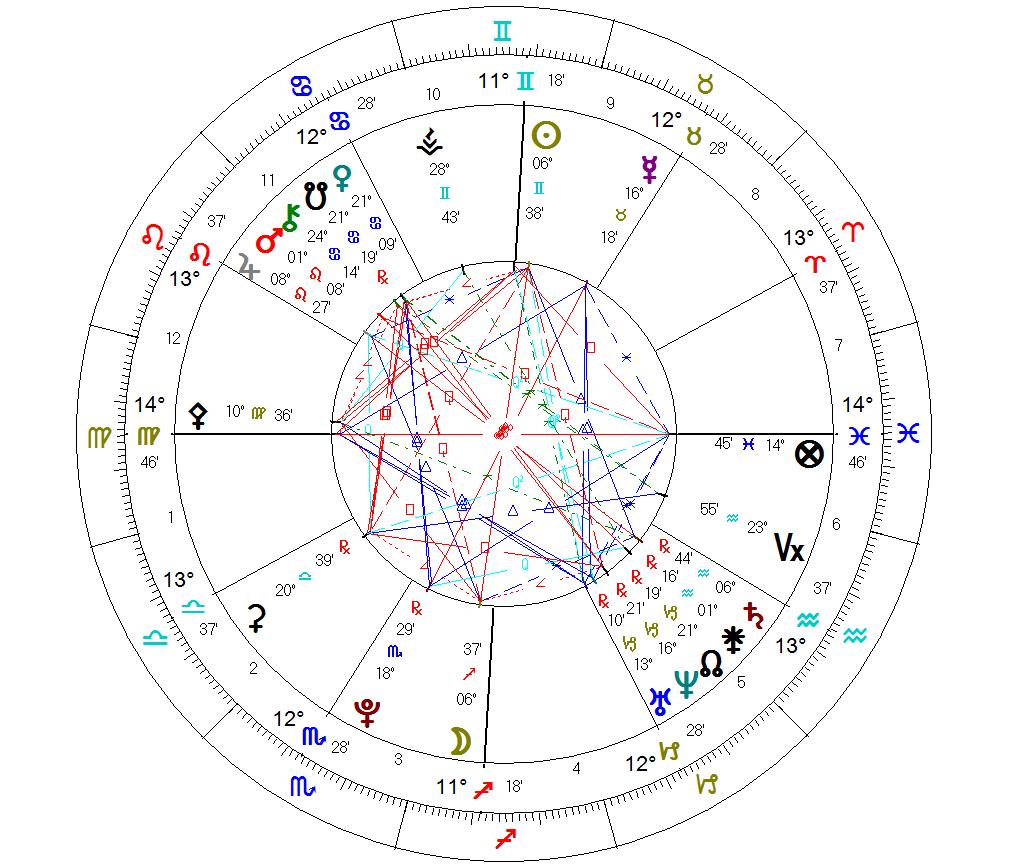 We have a very tight “Mystic Rectangle” with Jupiter trine the Moon sextile Saturn trine the Sun sextile Jupiter. Jupiter, ruling the fourth of home and family in Sagittarius closely makes a positive applying trine here to the Moon indicating the good possibility of a happy home life. The Moon represents the mother as well or at least the one who nurtures the most. In this case it may have been the father and the house of the father (4th) is rules by Jupiter as mentioned before. Jupiter is in the 11th, which is the house of friends and “hopes, wishes and dreams,” so the father may be a great friend as well. The 10th (traditional house of the mother), ruled by Mercury in Taurus is receiving a trine from Neptune in the 5th house and Mercury is received by Venus in Cancer in the 11th. This may indicate a mother who is a literally a miracle worker in the household–multitasking many things while remaining centered and calm, dealing with the duties at hand with rather innovative and/or inventive ways. Mercury rules the self as well with Virgo rising, so Moni may be very much like her mother. Either way, the resources of Fire and the self element of Earth in the Chinese Four Pillars show that there is an abundance of resources here and the Western chart reflects this as well. A Full-Moon personality on top of all of that (and along the MC/IC axis!) and we have someone who is bound to play important roles in the lives of others.

Moni may choose to be some type of power-broker, politician, business leader and/or an inspirational self-motivated person who gets things done, characteristic of the Fire/Earth personality. At any rate, I expect her to be a person who at the least will get the job done and inspire others to do the same! It’s interesting to compare the flexible qualities of the Mutable signs on the angles (1st, 4th, 7th and 10th) along with Mercury ruling the self and opposing Pluto in Scorpio (the transformational force) and her self transformation of Yang Earth and yin water into Fire in the Four Pillars chart. Thank you for reading. Thadd:::SignsInLife