I recently received an email from a reader of the site, so I thought that I would write a short post about it. She actually brings up a pretty good point and it really bears repeating over and over, which is the importance of the Daymaster or Self Element and it’s relationship to the rest of the chart. This factor, the Daymaster’s relationships, provide the basis for the understanding of how the elements in the rest of the chart affect one’s own self element. When we understand how this operates, we can then turn to the Ten Gods and their descriptions in order to determine the quality of the various relationships. Thanks, “M” for writing! 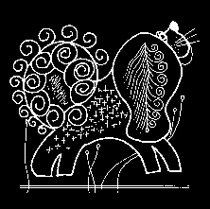 Hello! [“…”] I have recently come across [C]hinese zodiac and four pillar reading[s] and I just can’t stop reading and searching it on [the] web so I found [y]our site and it has been very helpful so far. I was wondering if you could tell me the connection between branches and stems.. For my DM for example I have yang earth and Dog and that is it? Thank you [so] much for reply and keep up good work! Greetings from Slovenia

What we have to first look at is the entire chart, however, “M” gives us only her day pillar, the Yang Earth Dog. Her Daymaster is the Yang Earth only and this is the “stem” of the pillar, with the Dog as the “branch.” Say that we were to have the Fire Snake as the month pillar. The Fire would be the stem and the Snake would be the branch. Remember that the Chinese branches were known as only “branches” before the animals were assigned to them. Of course this happened very long ago and is a mystery as to when, how, why, etc. But we really need the rest of the chart in order to get a sense of the “flow.” Where is the chart going? What are the predominant elements and what elements are lacking? We still need the other three pillars, the hour, month and year.

But within the Dog we have dry, yang earth, yin metal and yin fire in the branch or Dog. From here, we can analyze the relationship between the self element and the Dog. (The day branch or animal is also known as the “spouse palace.”) First, we have yang earth to yang earth or “Friend.” Next, there is the yang earth to yin metal which is the “Hurting Officer,” and yang earth to yin fire or “Direct Resource.” You can go back to the Five Element Theory article or watch the Webinar in order to see where each element falls in the cycle. As far as the Ten Gods are concerned, I have yet to write about them exclusively but you can read some of what I have written so far in Chinese Four Pillar Analysis Part III.

Here is one more piece of important information before we finish here: The order of importance or strength of each of the other elements to the Daymaster, Self Element or day stem of the day pillar (they’re all the same). The element or elements with the most influence are those in the month branch or animal. For example, if we suppose that there was a Fire Snake in the above example, then Yang Fire, or “Indirect Resource” would be the most influential element or Ten God relationship since it is in the Snake. The next most influential elements in order of decreasing influence after the month branch/animal are the month stem, day branch/animal, year stem, year branch/animal, hour branch/animal and lastly the hour stem. This information is from Jerry King’s books, which again, I highly recommend that you read if you are seriously interested in the Chinese Four Pillar system. Thanks again, Thadd:::SignsInLife