The Chinese Four Pillars of Destiny is a very old astrological technique. It has been in continuous use in China for nearly 1,400 years and has developed throughout the ages, specifically the Tang, Song and later Ming imperial dynasties. According to Derek Walters, Chinese astrologer and author of numerous Chinese astrology books (and Shelly Wu, a Chinese astrologer and Chinese astrology author) the most authoritative work on the technique is the San Ming Tong Hui written by Wan Yu Wu of the Ming dynasty. This work contained instructions for face reading and other means of divination as well, as explained by Walters. The technique that we recognize today as the Chinese Four Pillars was developed prior to this, however, in the Song Dynasty by the famous Xu Zi Ping or Tzu Ping after which the Four Pillars are sometimes named after, i.e., “Tzu Ping Astrology.” 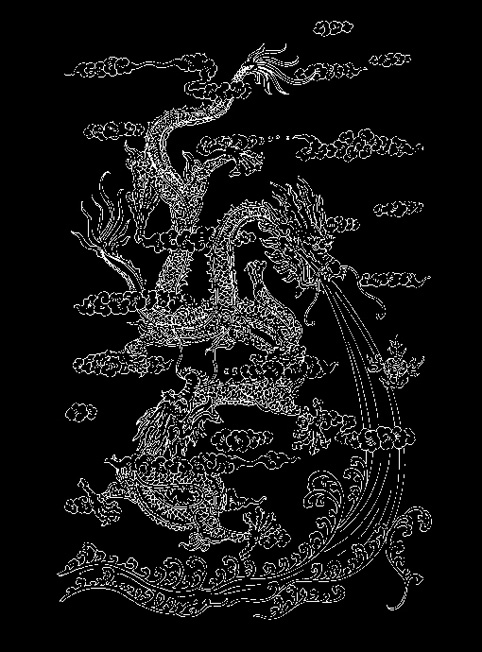 “Five Fates” or Wu Ming were employed by Chinese astrologers in the Song Dynasty according to Walters. Two pillars for the conception, (the hour and month) and three for the hour, day and month of birth. Perhaps an even older method only used three pillars or “Three Fates” also known as San Ming and this was probably the day, month and year of birth. Walters writes that San Ming may have also refered to a Han Dynasty expression, “San Ming She” or three kinds of fate: one’s behavior or justice, natural calamities and the “First Fate, Heaven’s Mandate or Destiny.” Walters goes on to write that this was “Fate in the narrowest sense of the word.” These concepts of Fate are an important concept to grasp if one is to continue with the Chinese way of seeing the world through this system of astrological divination.

It should also be mentioned here that the term “Ba Zi” is another widely recognized name for this technique and this is perhaps more correct than the term “Four Pillars.” (“Tzu Ping Astrology” is another term and astrologers who practice this system are also known as “Tzu Ping Astrologers.”) Ba Zi is translated simply as “Eight Characters” or “Eight Words” from the Chinese . From here on out I will refer to the technique as Four Pillars or Four Pillar Analysis. But what are the Four Pillars? Below I will simply outline a basic definition so that we can better grasp what we are looking at. Once the layout of the Four Pillars are understood, a Four Pillar chart can be drawn up in just a few minutes.

The following are some bullet points that will get us through the basics so that we can get a more complete understanding of Four Pillars:

Here is an example of a Four Pillar Chart for 4/22/12 at 1:30pm Local Apparant Time in Ft. Worth, TX. The hour pillar is the Earth Horse and would simply be called just that. For the day pillar we have the Water Ox and for the month we have the Wood Snake. The year pillar is the Water Dragon. It is understood that the polarity of the animal determines the polarity of the “stem” element, either Yin or Yang. The following chart is from the astrology software, The Imperial Astrologer. (Disregard the row at the bottom with the combined elements for now.) Also, here is a link for an excellent two-part article with one of the authors of the Imperial Astrologer, Malvin Artley. 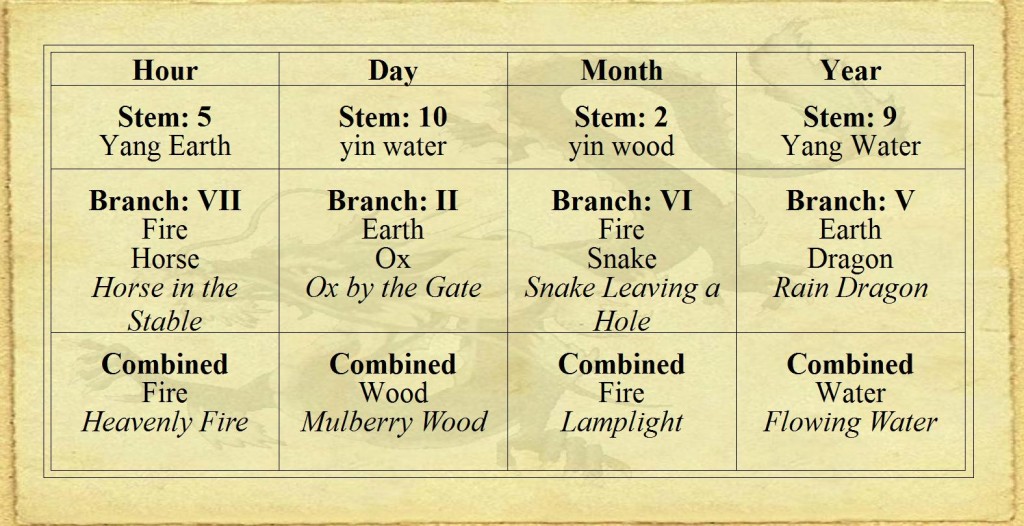 From here we will continue to learn about the Four Pillars through more articles without necessarily going through the entire previous lessons on the animal signs/branches or the five elements again. But this will be difficult for those wanting to explore the technique any further, in any depth, if they have not fully read and understood the previous articles. One may decide to stop here and get the basic introduction to the twelve animals and five elements by clicking on the hyperlinks above.

The rewards for learning the above concepts are more than the sum of their parts; even for those who decide to just learn the twelve animals and five elements alone for the purposes of understanding the Chinese years. Western astrologers can still be satisfied with this basic knowledge that will undoubtedly aid them in their astrological analysis. Chinese astrology can be fun as well and bring much joy and understanding to the astrologer and client. Receiving the enlightenment that this system brings can endow the client with a sense of relief and even confirm what other astrological systems have been giving all along, which is another great purpose. Thank you for your time and there is more to come on the Four Pillars, at least three articles in all. I look forward to writing the follow ups to this engaging and fascinating astrological divination system from the East. Thadd:::SignsInLife