First off, this is a long overdue article on a widely unknown and perhaps misunderstood part of the Four Pillars system. Thank you to all of the readers of this site. You are constantly telling me that I have the only site out there that is addressing the Four Pillars system in an adequate way, in English. But there is so much more to do and write about. Hopefully you have been reading all of the Reader Q&A’s that I have published in the last couple of months. There is more to come in the near future. Remember that you can read all of the current and past works of Dr. Lily Chung and her student Jerry King. All in all there are about 7 or more books on the Four Pillars between the two of them. The best thing that can recommend when using this system is to read, read and read some more and practice, practice and practice. And have a ton of patience for yourself and for others, that is the single biggest key. Jerry has repeatedly told me to “take my time.” This has been good advice as systems like this need time to settle in and I would imagine that this is true for any astrological or divination system. 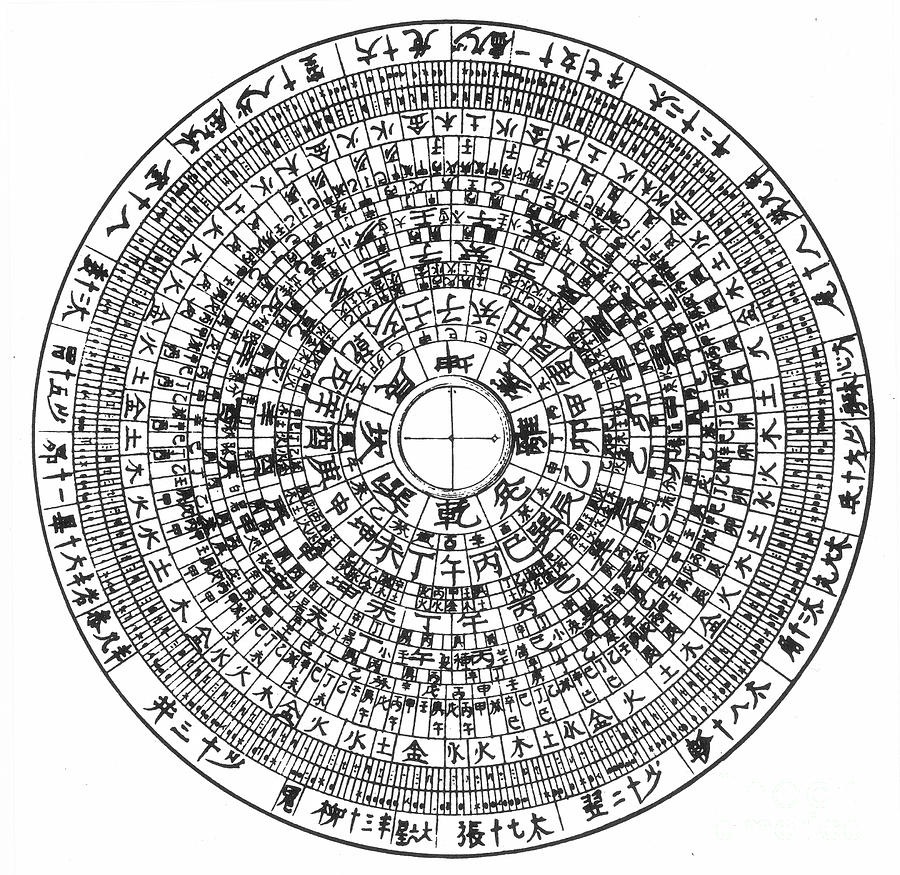 Chinese Compass–You Can Buy a copy of this print here!

The Luck Cycle colors and directs the Four Pillars chart as an additional key elemental influence. For example, someone who’s self element is categorized as weak will experience strength if the Luck Cycle element or animal branch fills in that much needed gap by combining or transforming with another branch or stem in the chart. What is the Luck Cycle you may ask? The Luck Cycle is a symbolic timing representation of both 5 and 10 years of an individuals life drawn out according to the Chinese calendar’s monthly progression starting with the month of birth. You do not need a person’s time of birth in order to calculate the Luck Cycle. The Luck Cycle cannot be underestimated in its influence; it must be calculated along side the person’s Four Pillars chart in order for the person in question to have an accurate Four Pillars reading.

In order to do the correct calculation of the Luck Cycle, you will need either a Chinese Calendar or one of Dr. Lily Chung’s books that contains a Westernized version of the Chinese Calendar: The Path to Good Fortune: The Meng or The Truth of Ups and Downs: Cosmic Inequality. There are errors here and there in Chung’s calendars but if you have done your homework and can recognize the essential patterns of the cosmic cycles that you should already be familiar with if you are doing readings (five element theory and the order of the 12 animal signs) then you should not have any issues. Jerry King recommended that I just start using the real calendars and I have done this as well. I would tell you the titles of these but they are 100% Chinese–no English anywhere on the pages! Of course the other option is software either online or on your PC or tablet. But I have yet to encounter one that gives you the accuracy that you will need. Even the Imperial Astrologer doesn’t give you the option for exact age progressions from one pillar to the next, it just rounds the numbers off like the majority of the rest of them do. There really should be an option for this on every piece of software that you buy…

Let’s start with an easy example: a male born July 21st, 2002. We are going forward since the person is male born in a yang animal sign year (the Water Horse). From 7/21 to the next climate divider forward (8/8/2002) we get 18 and 18 divided by 3 equals 6, so at exactly six years of age, this person started his first 10 period represented by the Earth Monkey, followed by the next 10 years at age 16 with the earth rooster, age 26 with the Metal Dog, age 36 with the metal pig, age 46 with the Water Rat, age 56 with the water ox and age 66 with the Wood Tiger. We will stop with here with seven pillars as this is the tradition but of course you can go further if necessary. Here is a pictorial representation below:

One more example: a female born in the year of the Yang Wood Horse, April 28th, 1954. Again, we must go backwards to the previous climate divider prior to birth which is on 4/5/1954. We have 23 days between the 28th and the 5th so when we divide that by 3 we get 7.667 or 7 years and 8 months. She will start her first luck pillar with the fire rabbit at age 7 years and 8 months followed by the Fire Tiger at age 17 years and 8 months and so on. Remember that we are using the very next pillar in the calendar that’s next to the birth month pillar, either forward or backwards depending on a male or female birth and animal gender.

Here’s some examples. Let’s say that we have a male born on April 5th, 1975, since the climate divider is on the day of birth, then the person would start the Earth Tiger cycle at age 0. (The Earth Tiger is the preceding month to the earth rabbit which is the birth month of the person in question). What about if the person was born on the next day? Then we are back to the usual rules where 1/3=.333 or 3 months. What we did is simply count one day backward to the climate divider on April 5th for a male born on April 6th, 1975 and so that person would begin their Earth Tiger cycle during the first year of birth also or age 0, similar as the first example but at 3 months. What about a female born on the same day, 4/5/1975? Her next luck pillar will be the Metal Dragon, going forward in the calendar, which would start at age 10. This is because we have a female born in a yin animal year (wood rabbit). For a male born on the climate divider on November 8th, 1998, he would begin his next luck pillar at age 10 with the water pig, followed by the Wood Rat at age 20 and so on. A female born in the year of the Fire Dog on February 3rd, 2006? Her luck cycle would start immediately at age 0 with the Metal Rat followed by the earth pig at age 10 and so on. Notice that her birth month is the metal ox and that we are going backwards in the calendar because this is a female born in a yang animal year.

As far as interpreting the luck cycle goes, use the stem for the first 5 years followed by the animal/branch for the next 5 years and so on. This may seem strange but this is how the system is practiced, even though the entire pillar is said to influence the 10 year period in question. Take the first example with the male born on 7/21/2002. You can see that at age 21 he will have moved into the rooster part of his Luck Cycle. Next, he will move into the Yang Metal part of the Luck Cycle at age 26 and that element and it’s representation will be highly significant for that period of time. When will this occur? 2002+26 = 2028. You can be more precise and even calculate the time of year, so for him this would be July 2028. For others whose Luck Cycle starts at say 5 years and 5 months, you would need to simply find five years and five months into the future after birth and then repeat this through the process. You can then give a more accurate picture to the client in question when it comes to the exact beginning of a Luck Cycle. Also, you have to keep in mind that elements and animals in the Luck Cycle will combine, clash and transform with the chart in question, i.e. if someone has a goat in the day branch and a pig in the year branch, a rabbit in the luck cycle will combine with the other two to form a powerful, complete Wood Team (three harmony combination). This could dramatically change the character and cosmic system of the person, most likely strengthening them or weakening them to a considerable degree.

For easy reference, here are the decimal conversions to months (remainders when you divide the number of days between birth and the climate divider by three):

Many thanks again to everyone who supports the site and my writings. I have a few more ideas for articles on the basics of the Four Pillars and will, with any luck, be publishing these this year. Be sure to contact me with any questions or comments that you may have, I look forward to reading them. Thadd:::SignsInLife