First, if you planned to attend the upcoming 2nd Annual Vibrational Astrology Conference later this month (Friday March 27th through Sunday March 29th) but were concerned over the travel or expenses associated with traveling, then you now have absolutely nothing to worry about! The conference is scheduled to be online! If you have already registered, then you should have received an email about forthcoming instructions on how to access the conference live. You will also receive a recording of all of the presentations as well. See the link above for speaker and topic details.

And, just as importantly, I want to say “Thank You” to all of the recent and current subscribers, it makes me happy that so many people are interested in astrology. The growing awareness of what astrology can offer is a sure sign that human consciousness is moving in a brighter direction as a whole, although at the current moment in time, it may not seem that way. This too will pass as many of these things do. You may recall the swine flu, Ebola and of course the original SARS that struck in the early 2000’s, although I recognize that the present pandemic is a far greater threat.

From a mundane astrological perspective, it’s the outer planets and eclipses that seem to have the most to do with world wide shifts and changes and that probably goes without saying for many astrologers that have been around a while. Saturn and Pluto have a dramatic and real influence on the current situation. What this combination is telling us is that it’s time to dig deep and to get serious. We need to get real with the things that matter the most: home, family, friends and the requirements for covering the basics. This will mean different things for different people and taken to the extreme, this energy can be strict, isolating and create a sense of doom. The primary eclipse trigger point, using the true node positions, occurs Sunday, March 22nd, so keep an eye out for events around that time and see the previous post for more dates. (eclipse effects are not a part of VA theory as of yet but could be someday with enough convincing evidence).

Harmonic charts of the current sky can reveal some further details into what is transpiring and describe the quality of the energy that we’re facing. Two midpoint structures in the transiting 11th harmonic chart involve both Saturn and Uranus: Uranus is currently at the Saturn/Pluto midpoint which is exact on April 25th, 2020. Uranus is also at the Jupiter/Saturn midpoint and this one peaks on March 21st and May 16th, 2020. Also, Saturn is at the Uranus/Pluto midpoint in the 4th, 8th and higher octave harmonics, which peaked on March 15th and will again on May 31st, spanning it’s influence through mid June. Many Uranian/Symmetrical and Cosmobiologists are aware of the last midpoint structure. The compulsive and deep energy of Pluto combined with Saturn and Uranus will prove to be a difficult energy to navigate through. 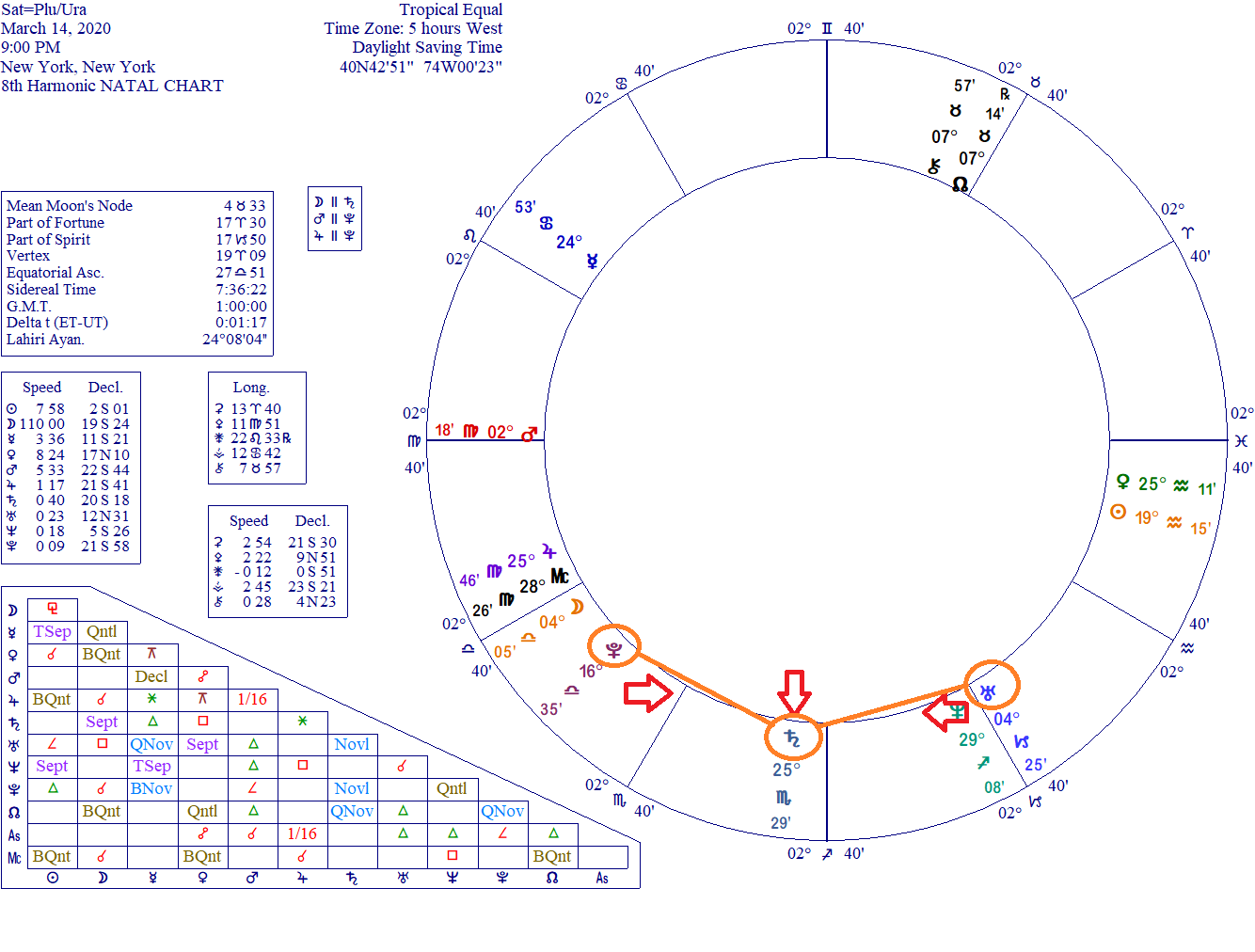 All of these midpoint structures involve rapid and unpredictable changes, with two planets that are classic disruptors when they get together, namely Saturn and Uranus. The 11th harmonic is restless, dynamic and can’t stop moving. In essence, 11 is hungry and with a stomach that never fills up–it just has to keep going somewhere. The 8th harmonic is basic fundamental action and inner drive or rather “the driving force,” much like the aspects in the natal chart of a person. These two planets, Saturn and Uranus, serve these vibrations well (in perhaps a less constructive way often times) and therefore those individuals with a strong handle on the 8th and 11th harmonic patterns in their harmonic charts should be able to roll with the punches. These energies are very likely contributing to the panic buying and as a result the big companies that are adapting to the rise in demand will stand to benefit. You could also call the Saturn/Uranus energy rebellious, disruptive, turbulent and not wanting to accept anything from authority. This is the indicator of the true maverick.

And if all of this wasn’t enough, Saturn, Uranus and Neptune form a grand trine in the 5th harmonic, with midpoints peaking in mid March and mid May, all staying within a degree from now through the first week of June. This means that the Saturn/Uranus disruption is flowing organically and idealistically with Neptune involved, with perhaps no end in sight. One may see this energy as a rebellious vision, an idealistic disruption or even a rebellious (Sat/Ura) invisible (Nep) force that is seemingly “playing” (5th harmonic) with us! Of course, there’s much more to discuss with regard to harmonic charts of the now situation on the Earth, but I thought that I would leave it here for now and just cover the repeating Saturn/Uranus themes. Most of these turbulent energies will dissipate around June and more much needed 9th harmonic energy will come in around the summer involving Jupiter, Uranus and Neptune. Many are predicting a turn around with the pandemic at least by the summer months (UV light is helpful for this).

Lastly, the turbulence in the financial markets has been predicted for a while now, with the bubble seeming ready to pop at any moment. Perhaps the pandemic will make it worse or perhaps help it along in some way. For the moment, it seems to be making it worse and yet there’s a silver lining in the fact that many of us lived through the Great Recession of 2008 and it is still fresh on our minds. Change is certainly needed in the way that we operate as a global society from a financial and commerce perspective. I am not an expert in these fields–I’m just looking at what I can based on the current astrological techniques and tools that I am working with. Most of us are doing the best that we can and that’s all that we can do.

Special thanks to David Cochrane and the rest of the Avalon school for their inspiration in writing this article. Hopefully, I will see you in the chat area of the upcoming VA conference!

[Update–March 23rd, 2020: see this article on the Coronavirus Rebels. This matches right along with the ongoing Saturn/Uranus energy. There’s definitely the idealism of Neptune with this as well with a “live for today” and “live your dreams” kind of attitude. And the feeling of the 5th harmonic which is very much an alive and life giving energy. The virus is alive and doing it’s thing and people are just doing their thing as they normally do. It’s interesting to watch how the various planetary combinations manifest throughout the different harmonics/vibrations.
Toggle the Widgetbar