Eclipses have fascinated and frightened people and animals since time immemorial. They have been associated with shifts and disasters, breakups and endings and big changes in general. One astrologer commented that eclipses have the energetic impact of an outer planet transit to the ascendant or midheaven (MC for short) and I agree with that. Eclipses don’t have to shake your world but when they do the feeling is palpable and sometimes lasting. However, regardless of the feelings that come along with the eclipses, whether of the solar or lunar variety, many just want to know a very simple question: “What will happen to me?” 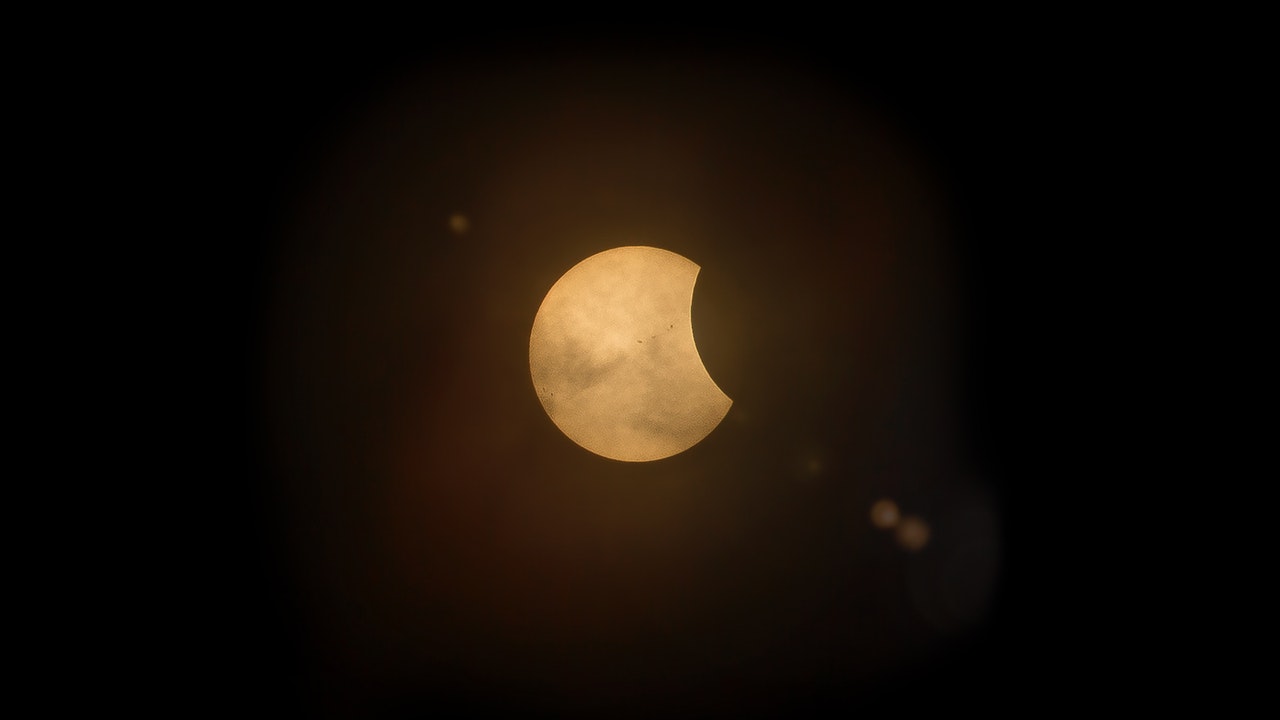 This question can be a difficult and time consuming one. There’s much more to astrology than just a simple or even in-depth write up on your sign from a Sun Sign column. Yes there’s some truth to it. For example, there’s some truth to the fact that if you find quartz in the ground that there’s gold nearby but we need more evidence than that. We have to dig many times in the right areas, in the right way but not all of the time. So like many things in astrology, it’s all on a case by case basis between you and your astrologer.

Learning some astronomy will assist in the understanding of the symbolism and the impact of eclipses. The most obvious is the Moon or Luna transiting over the Sun, completely blocking the Sun’s light. Now if this happens and you’re in the path of a solar eclipse then you will notice a dimming or a brief blacking out of the sky. Hopefully, you will refrain from looking directly at it; this is very dangerous and can permanently damage your eyes! So there is a real physical threat of obvious damage that can happen to the human body just by simply viewing a solar eclipse. The question is then, “What does this do to my chart?”

Again, the answer lies in the chart of the person. Many times there’s a strong energy shift that people notice with themselves, like a scattering or a diffusion. Most will feel and see this like some kind of disturbance. It can affect your balance and if you’re sensitive enough, you may get the idea to go to bed and rest. Others feel energized and awakened. At the very least, there’s a recognition that something is changing and this can happen before the eclipse and certainly during and after.

There is often an event in people’s lives associated with a solar or lunar eclipse either on or around the day of the exact eclipse date but this is not always so. Often times, one of the Moon’s nodes will cross the point of an upcoming or previous eclipse and that crossing point is very near or exact to something sensitive in the natal chart, solar return chart, progressed or directed chart of the native. The primary sensitive points are the Sun, Moon, ascendant, MC, Mercury, Venus and Mars (and I may even include the Vertex axis in this list as well). The biggest impacts are when eclipses closely conjunct, oppose or square one of these points (less so with the square). I would give the orb up to 5 degrees. I recommend Robert Carl Jansky’s “Interpreting The Eclipses” for more information on this. It’s a good, reliable, solid and quick reference on the astrological effects of solar and lunar eclipses.

Any other planet or point can also be significant, including the natal house that the eclipse falls in. As an extreme example, you may be one of those astrologers who might ask, “Well, what about the next solar eclipse transiting my Mercury, which is almost exactly at the midpoint of Saturn and Neptune in my natal chart?” “What does that mean, huh, Mr. Smarty Pants astrologer?” That’s OK and yes, the eclipse has an strong effect in that scenario as well. This hypothetical astrology student is upset and frustrated for some reason hence the “Mr. Smarty Pants” accusation. A person who notices this kind of configuration in their chart is very astute but I can’t get thrown off by the Mercury/Saturn/Neptune thing. It’s there but there’s more going on.

Nevertheless, in the above example, the person is undergoing a re-wiring of sorts in how they communicate and deal with the abstract spiritual realities of life. Many will see this as conceptual, philosophical and perhaps speculative stuff like metaphysical topics and how all of that can be related to and studied. This is most likely in some kind of academic setting. The mind is taken to a very deep place and then the solar eclipse happens. The person is changed in some way; ideas are removed and new ones are brought in which can be a painful and disturbing process. 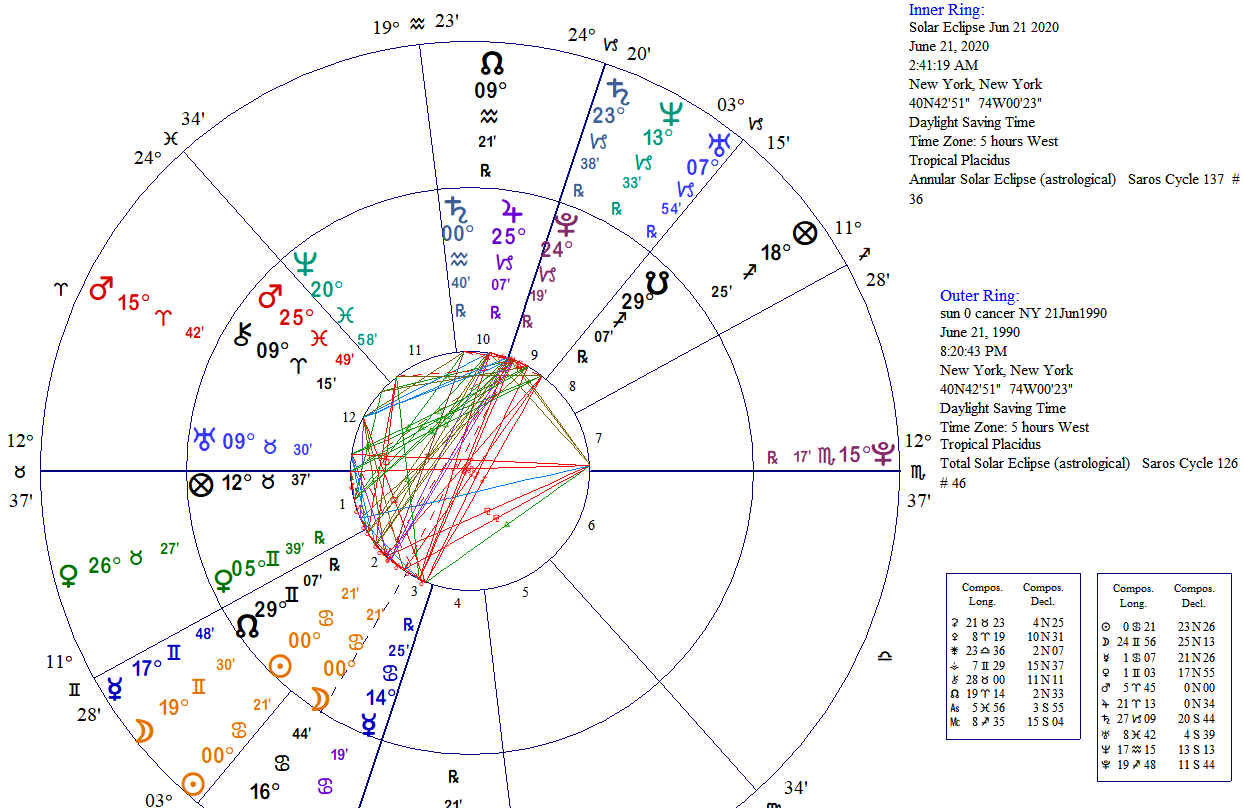 Example: a hypothetical birth chart, 21 June 1990, where the upcoming solar eclipse is exact on the native’s Sun by degree and minute.

Here’s a much more salient example, “The eclipse is on my birthday so what am I supposed to do?!” There’s some element of panicking here and I do feel your anxiety on this. Knowing nothing else, other than the trigger dates by the lunar nodes and perhaps some of the planets transiting to the eclipse point, I can only speculate. It might be upsetting or cathartic. An event may have taken place or will take place. At the very least the person will go some kind of fundamental re-wiring of the self as they and others see themselves in the present moment (VA theory of the Sun, not the “re-wiring” part as of yet). Here, the obvious self, which is the person in the present moment is energetically touched upon in a profound way. This is a sensitive time. The native is very likely to have an important year for their solar return year, which is their birthday to birthday year.

Why do I list the birthdays of people who may be effected by solar and lunar eclipse energy? Because eclipses are critical celestial events with likely impactful global and personal consequences . Also, it’s something that I can do and it’s not that difficult to work backwards and find a handful of birthdays that are within range of a conjunction, opposition or square to either a solar or lunar eclipse. I say “birthdays” but what is really happening is I’m translating the exact zodiacal position of the Sun on the ecliptic to a very close range of dates on the Gregorian calendar. What we get is a rough 1 degree orb, just to keep it simple and close for exactness. You can extend the dates out either side if you wish. More than five dates out on either side of the dates listed might be out of orb, depending on where on the Earth you were born. Time zones do matter with this kind of list.

Thank you all again for reading and I did enjoy putting this article together. It is long overdue. I will link to this article with every new eclipse write up that I do, to keep in handy for future reference.